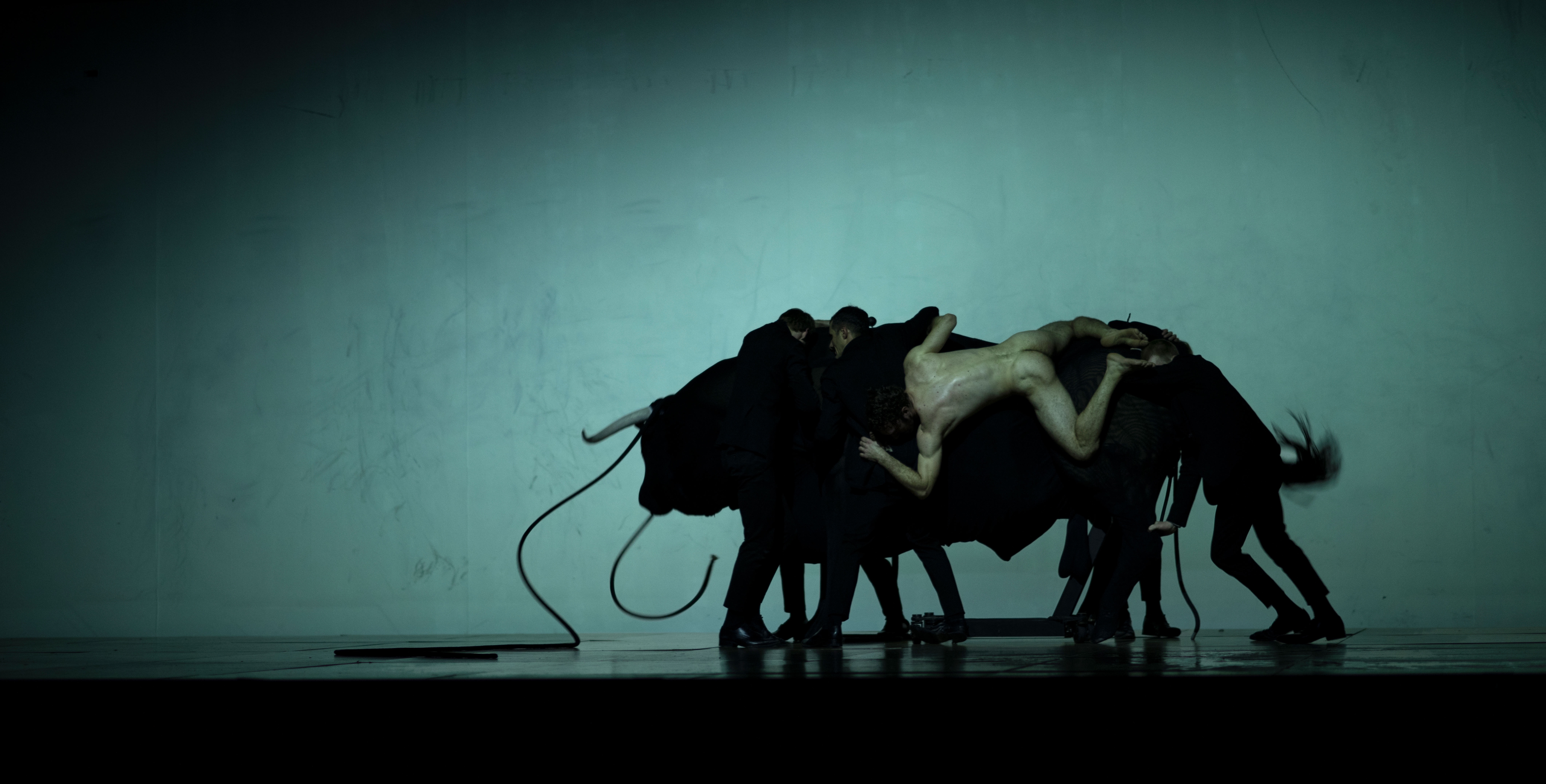 Known for being the youngest ever creator to have directed the 2004 Olympic Games ceremonies in Athens and for being the first artist to create a full-length work for Tanztheater Wuppertal Pina Bausch, Dimitris Papaioannou is one of the most renowned names in the international dance scene and a true pioneer of the art form. For the past 30 years he has created an eclectic medley of movement universes by experimenting with the beauty and darkness of the body onstage, with examples of his work including Primal Matter, Still Life, The Great Tamer, Since She and Ink to name but a few.

As theatres and countries’ borders reopen, Dimitris Papaioannou’s new production Transverse Orientation is on tour and coming to Dance Umbrella Festival 2021 at Sadler’s Wells in London this weekend.

I had the privilege to speak with Papaioannou to talk about Transverse Orientation while the company was performing in Bulgaria about a week ago.

Giordana (hereafter ‘Q’): The first thing that stroked my attention when I saw the first images of the new work was the figure of the ‘bull’. Immediately it associates with the figure of the mythological Minotaur. Was this image important to this work?

Dimitris: The black bull certainly connects with the concept of masculinity, and it helped me to play with the composition in space by using a lot of suited men. I wanted to explore the possibilities of creating the illusion around the idea of this animal that walks among us and that we are trying to tame. More broadly I was thinking about the untamed arcade that is life.

I also tapped into the myth Theseus and the Minotaur. I give a loving look to the things that have been killed behind us; I have tenderness for those who have had to die out. I soon realised that I wanted to use this myth to talk about a more contemporary version of man assassinating an older generation to move into a more evolved civilisation.

Q: Your new work is called Transverse Orientation. Why the term transverse?

D: It’s originally a term from entomology — now known as the study of insects but previously it included animals. In the work entomology is explored through the figure of the bull who is always thirsty and the figure of a woman appearing as water. She is the moving mechanism, every time she’s appearing things change, as if she was the Moon orientating the male.

The role light plays in our world fascinates me. We all struggle in relation to light and dark. In this work the Moon is a primordial spiritual light. This symbol is compelling to me.

Of course, this is just theoretical nonsense because this is just a play! Those symbols are the elements with which we like to improvise and see what we can create. I never start a work with the idea of talking about important issues, my interests are to create something organic. The more we work and dig into, the more we realise and discover issues about life.

During the making process, taste is important. If I like something it will be a result of its sensuality, not logic. There are elements — aromas or tastes — that I try to arrange and make them work with each other, without any storyline that has to do with a logical or chronological order that the audience already knows.

Q: Water seems to be an important element in Transverse Orientation. Why is that?

D: I wish I could work with both fire and water, but due to safety issues fire is impossible. Water is a wonderful element because it can change something completely. Its ability to reflect and refract makes it a strong visual element.

Water is an essential ‘drop of reality’ in all the transience of theatre. Theatre is of course play so water’s role, for me, is important. By being in a completely metaphorical space, water helps us accentuate what’s real. It can reveal the sensuality of things, reflect light in a unique way and it changes the surfaces of bodies and fabrics. Water really fascinates me and has a feminine element to it; it embraces and cleans you as well as creates life.

D: The premiere marks a milestone and after this, things get even more creative. Now we are on our tenth city and our show has changed already, so much that it is 15 minutes shorter. This is an enormous amount of time. We have not eliminated anything, rather the work is finding its internal rhythms. I’m also adding some details and clarifying some aspects. For me, every time my work is presented, I want to be present, I consider it part of my responsibility to be in the theatre and have rehearsed 10 minutes before you enter to watch.

Every time I share my work with an audience, there are moments when I don’t feel nice, rather uncomfortable, and I feel like things need to be fixed. I hope that people will not be disturbed by the awkwardness or will not understand that there’s something missing. But if I feel that I’m uncomfortable in a specific section, the next day I work on it, maybe by bringing some new ideas or enrichening it with a further element.

The presence of the audience helps me feel uncomfortable. When I’m alone and I’m not sharing it, to be kind to myself I pretend to ignore the weaknesses of the show. However, when I have the urgency of the presence of people, I cannot do that, and it helps me to have a clearer idea to identify what’s missing. I have the illusion that one day I will reach a night where I will only feel pleasure.

Q: In your works there are many mythical and cultural references from the Western culture. Both from mythology, as well as artistic references. What are their purposes? Why are they still interesting or interesting for you?

D: Mythology and cultural references are like a language that has no words or text. They are implicit. I don’t know what it really is, but they are common grounds of reference that are interesting to me and my storytelling.

It is a game of associations, an extension of the journey of the eye. I’m very often trying to play with simple illusions, to persuade you that all those limbs belong to the same person or that the black clothes are a chaotic background, and the naked flesh is what you should be seeing.

If something looks like something else but reminds you of an image you have seen from a famous painting, this painting is most probably an illustration of a famous myth which regards topics such as beauty, love, narcissism, monstrosity or about a father and son relationship.

Q: Would you be interested in exploring some of your previous work?

D: I would be very much interested to do that, but unfortunately the government of my country was never really thinking about providing the resources to create a repertoire. Repertoire needs a lot of stability, a big group of people and dedication. It is unfortunate given I’d love to revive some past works.

Q: How important are the people you work with?

D: I do theatre because I must be with other people. I was once a painter — my painting is stronger than my theatre — but I was alone. Having a group of people and the audience change the energy completely.

People and their lives come to the theatre. My collaborators influence my work a lot and it doesn’t happen consciously. By working with sensuality, I need people that inspire me and give me joy in working with them. They change the tone of my creation.

There are other people that resist me and have a different side. Yet by bringing in their experiences, they also shape the creation.

Q: When I think about your work, I refer to it as a theatre of images or a language between visual art and bodies. What do you think when people categorise you?

D: I think that the dance world is generous enough to include hybrids like mine. They also categorise me as ‘dance’ because it’s easier that way. I believe that I am a choreographer of elements, I create images that appear and dissolve in front of your eyes, and this is the choreography of the illusion. I think the power of my work does not lie in a static placement of elements but as a continuous morphing of ideas, lights and shapes.

I am grateful to be categorised as ‘dance’, but I am sorry to be called a choreographer next to the genius of William Forsythe. I don’t know how to choreograph humans; I don’t know the job. But I can do something which is to do with the arrangement of energy in space and time. I don’t know and I cannot speak the language of dance, but I know a lot about human movement.

G: Which dance performances inspire you?

I am inspired by all good art and dance. I went to watch the dress rehearsal of Robert Wilson’s revival of I was sitting on my Patio. The work was so clearly articulated. The next day I told my entire team that there is a moral value when something becomes such a crystal-clear version of itself. It’s very inspiring to see something that has this life force of clarity and existence as an art piece.

Q: How do you come into a new work — how do you stay brave or honest to yourself?

D: I am questioning this a lot. I know that after I have created something I have to live with it for two years because I will be most likely performing it for a long time.

But the answer is very simple and I’m glad I can talk to you about it. One of my past works Ink does not have any illusion nor hybridity. When I created it, I was not thinking about anybody’s expectations. Whenever I find myself lucky enough to have time to stop working, I do something that is completely liberating from expectation, and find a way to re-fertilise myself.

It is an absolute blessing to have this as professional life. Audiences want my work to be nutritious. But there is a pressure that comes with that…

But this is a minor problem in comparison to the issues the world has right now. I am a lucky man to have the resources to do my work and an audience that enjoys what I make.

For all forthcoming performances of Transverse Orientation, head to Dimitris Papaioannou’s website.