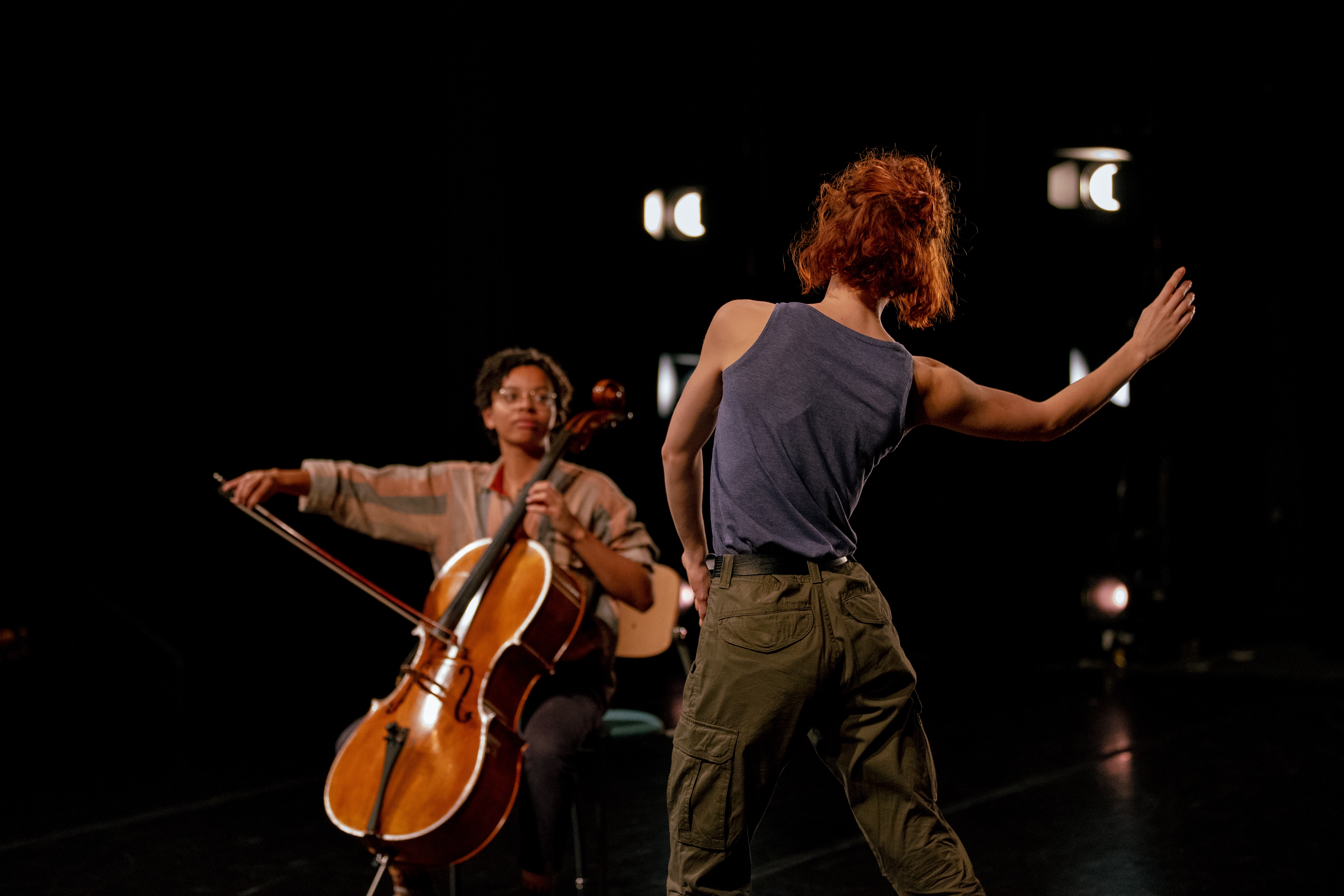 Both Glasgow based artists, Taylor Han and Simone Seales’ show With Catastrophic Consequences is performance which invites the audience into a space of collective warmth, using improvisation and storytelling, or story sharing, to build a performance of dance, music and dialogue that explores individual and communal moments of joy.

Han has a focus on improvisational practice, musicality and community work, while Seales’ seeks to create spaces of ‘radical joy’ as an ‘intersectional cellist’. The two artists’ practices have collided and culminated in With Catastrophic Consequences. They use audience prompts and memories to create improvised performances for the whole audience. The audience for instance collectively makes a song on a loop pedal, and Seales travels outside their comfort zone to perform a dance choreographed by audience suggestions. The result is warming and uplifting — with beautiful, poignant and humorous duets and solo moments from both performers.

Watching the performance unfold showed the potential of improvised performance to connect strangers and use risk to craft unpredictable moments. I spoke to Taylor after watching the show on Sunday at Pianodrome as part of Edinburgh Fringe Festival 2022.

Question: Could you talk a bit about the name of the piece – With Catastrophic Consequences?

Answer: It’s a bit tongue in cheek, obviously – it’s not, it’s not really ever going to be a catastrophe. When me and Alex, the first musician on this piece, were working together, we were just playing with ideas. He was reading a book and on the blurb there was a quote, and it was like, ‘fuelled by desire, she makes her move with catastrophic consequences’. And we were like, well, that kind of works. So we just kept it as a little reference to the potential uncertainty and catastrophe that could unfold.

Question: Could you tell me about the creation process and practice that you and Simone have together?

Answer: It’s been a bit of an unusual process in a way. I had initially been working with a different musician, and we had developed the structure together within the show; little episodes at moments, improvisations. And then basically, because of COVID, and of living in France at the time, he ended up not being able to work on the project anymore. So I did a call out, which was how I found someone, which was really scary and nerve wracking for me because it was a lot about our relationship. So, it was really important for me to find someone who I felt like I had a really good rapport with. So I was just very lucky to have met Simone. We worked on ideas made with the Alex, and also did a lot of learning about each other. We also work with a dramaturg/co-creator, Ramon Ayers who helped craft how the show’s peaks and troughs. Initially, we spent a lot of time just playing and moving and trying to attune to how one another creates.

I think a lot of that groundwork has helped when we use these quite abstract ideas from the audience members. Ramon helps us crafts it, and craft our own stories that we bring to the work. We worked together at the space in Dundee, and that was where we sort of honed in on the majority of the structure. Since then, we’ve honed in on things, tightened things up, played with things and suggested different ideas before a performance. We called the sections ‘building blocks’ which we can reorder for different performances. So, as long as we’re confident with the structure of each block and how they fall into each other, then we can kind of mess around a bit.

Question: The performance focuses around creating a joyful experience through dance and music; what was the motivation for making the piece?

Question: What was it about improvisation, that you were drawn towards?

Answer: It’s funny because when Simone and I are rehearsing I’m like, we’ve made this really hard on ourselves. I’ve always just really enjoyed improvisations and playing with the sort of intricacies of music.

When I watch contemporary dance, I really like to feel included as an audience member, I like to feel like I’m there with them. So, I think that was a nice way for me to tie my love for improvisational music, but also to sort of include the audience in that way.

Question: A lot of the pieces includes storytelling, either from the performers or the audience, and sometimes translating stories to movement. What is it about movement that you think is particularly good to be able to sort of make an experience?

Answer: I hope I’m not saying to this audience member: okay, well, now I’m going to dance your life. Instead I’m like: thanks for sharing this little segment of your joy, I’m gonna see if I can make something that translates into joy for me and someone which can then pass on to the audience. So it’s more like a stimulus or something. It’s really exciting, and also really difficult because we have no idea what people are gonna say. We can work around it and we can always ask different questions or, you know, dig into things a little bit more, if it’s something that we aren’t sure of how to approach.

Question: How did you test audience interaction in the creation process?

Answer: In the creation process it was still COVID time. So for our audience we had three or four people in our audience. At our residency at The Space, we tested it on all the students at the space. There, we could perform for them, stop, and then ask them questions about their experience. That was really fundamental, because it’s quite a difficult piece to rehearse without an audience.

Question: The audience participation fosters a sense of collectivity in the audience. What creative tasks did you experiment with to create this?

Answer: There’s been lots of different iterations. Most of the structure is similar, but it’s the subtlety of how we interact that’s changed. We were very conscious of audience participation often being uncomfortable for people; we didn’t want to single people out. We found that when we just asked an open question and waited for a response it was actually harder for people to participate. But when you make eye contact with people, and you sense that someone might be interested, it’s easier to ask them a direct question. So that was a big learning curve for us. We also had to do a lot of changing and testing when making the song with the audience. Because of COVID there were times we couldn’t even go near the participants. So we had to listen to their music, then repeat it ourselves on the loop pedal.

Question: Have you ever done it with younger audiences?

Answer: Yeah, it was really fun. They loved the section where we made someone dance and they were so creative with their suggestions. The kids were like ‘so someone, you’re going to be being pulled apart by two ropes, and then those ropes are going to be cut. And then you’re going to be picked up like a puppet.’ On a residency at Dundee Rep we got the chance to work with lots of different community groups; young people age 11 to 13, older men who are recovering from addiction, we’ve worked with people in a mental health and wellbeing group. This really helped grow the show.

Question: And how did this sort of almost like meditation imagery at the end?

Answer: So that was our collaborator Romane. He said ‘this might sound really cheesy, but just go with it.’ So we got the audience to imagine a dance, and we thought it worked and added in. And because of COVID nobody could touch each other. So, we were thinking about how we could get people to dance together without actually being together.

We’re very careful about our language and how to bring people into and out of the meditation safely. I’m very conscious that when you ask people to imagine a favourite person, they might imagine someone that’s not here or it could be a dark experience. So, we’ve tried to use grounding techniques to make it as safe as possible for people.

Answer: Simone is very good at remaining calm and remaining relaxed. I think musicians are much better at spontaneity and limited rehearsal time. Whereas, I feel like dancers are a lot more primed to be making everything perfect within a hair. So it’s been really nice to capture Simone’s energy, especially when we’re like backstage and I’m freaking out. Maybe it’s nothing to do with the fact that they’re a musician. But that’s been something I’ve definitely learned; to keep calm and to take my time to listen. Simone is really good at listening. If I’m ever unsure on being anchored by a concept, or an idea that an audience member has suggested, I can anchor myself to Simone’s music. They’re a super talented performer and musician, and that was always really important for the show; it wasn’t going to be a musician who sits in the corner. It’s been really enjoyable to find that collaborative voice on stage.

With Catastrophic Consequences was performed at the Pianodrome as part of Edinburgh Fringe on August 27th and 28th 2022. All images by Genevieve Reeves.

For more information about the artists: