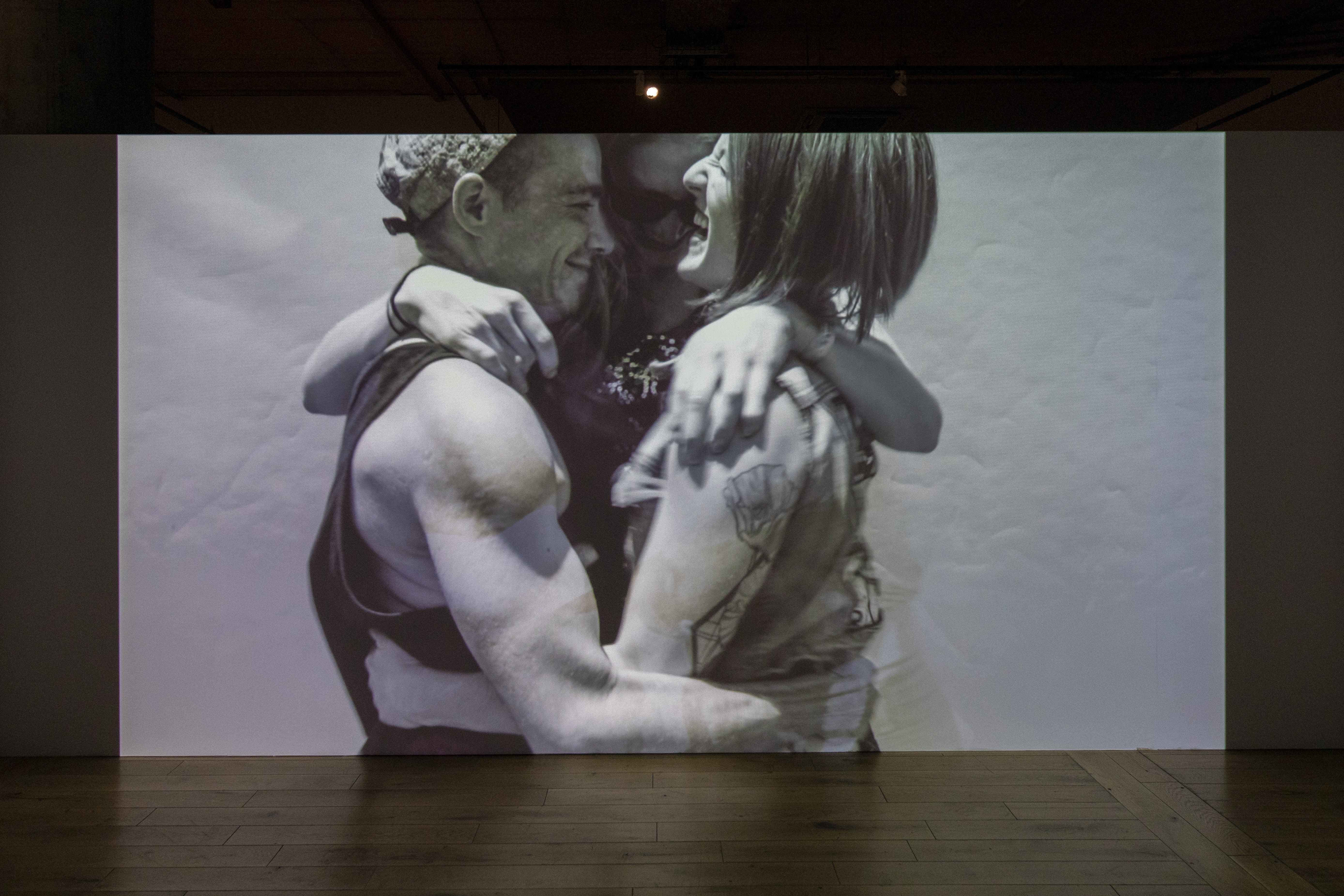 When I leave Cassils’ retrospective exhibition ‘Human Measure’ at HOME in Manchester I’m reminded of that fuzzy orangey blue shape that appears in your vision after looking at the sun for too long. Bright images of floating bodies are burnished into my mind; bodies are lapped by fire, and white ethereal silhouettes swim in a cobalt sea. Human forms are repeatedly revealed and concealed to me, demanding me to handle them with reverence and care while inviting me to be curious and challenged.

In conversation with Cassils, their commitment to a rigorous research-guided process becomes apparent, strongly supported and complemented by the more instinctual and gut-led creative practice of choreographer and dancer Jasmine Albuquerque. They started working on ‘Human Measure’ together in March 2021 prior to the first lockdown, alongside martial arts professionals during which they were gravitating towards what Jasmine called a more aggressive feeling for the performance. Yet on returning to the piece after lockdown both Cassils and Jasmine felt the need to shift towards a more joyful, purging and cathartic tone which gave voice to the experiences of the cast of trans and gender non-conforming dancers.

Cassils: “We’re living in a world where actually there’s you know, a political system that’s trying to actively erase you. And yet you’re still trying to be a person that’s coming into your power, into your presence, into your sensuality…how do you hold those two lived experiences?”

Yet holding these lived and felt experiences of struggle, rage, fear and violence alongside joy, sensuality, ecstasy and hope is exactly what I feel as I walk through the exhibition. In response to a question about the shift in their work from individual and self-representation to more communal work, Cassils spoke of the ‘burden of representation’ they felt making work around 2010, when there was even less awareness around trans experience and trans rights — with terms like non-binary or gender non-conforming and pronoun variants not being broadly spoken about.

While the piece was initially made with a cast of US-based dancers, there was a call out for dancers from the trans and gender non-conforming community for the performance in the UK in early October. Jasmine didn’t want these dancers to see previous versions of the performance, instead encouraging them to bring their unique qualities and experiences. They plan on using this as a model for working for future performances of ‘Human Measure’ which Cassils says “allows for the infinite iteration of variants…it’s very much about, I don’t want to say diversity because it’s such an overused word, but it’s about insisting that there is not one stand in for a subjective presence that equates this identity. That there are, a million different variances.”

These frameworks they are working within feel radical; of enabling dancers to be free from a certain model of attainment or previous conception of the work, of actually allowing people to feel and work through their own experiences and emotions within the narrative and creative process, and to develop the work as a site of safety and strengthening. As Cassils highlights: “you did get that sense amongst the dancers, especially in the UK, actually, that those who are gender non-conforming, it was the first time that they were allowed to truly embody a movement, that… reflected their true gender identity.”

Cassils, Jasmine and the curator Bren O’Callaghan were conscious of working with local communities to create a Trans Advisory Committee for the work, to embed the work in place rather than superimposing a static and homogenous narrative.

Cassils: “What would it be like to make an artwork that was more than just symbolic and metaphoric, but actually would give those who partook in it a sense of embodiment, be it an emotional sense of involvement, skill-sets that they could use in personal safety or self-defence and whatnot?”

Cassils bases much of their work in art history, and while it doesn’t matter if people know the references, there is a sense of creating new mythologies throughout their work and using performance as a radical framework for storytelling and world building to be shared and experienced by multiple people.

Their work disrupts dominating and singular narratives, creating more sustainable and wider communities of embodied knowledge and experience. Living under Trump, both Cassils and Jasmine felt the need to create resistant ways of work and new strategies. “I feel like the thing that I have learned in the past several years of my practice, and part of this is working with you too Jasmine, is that you cannot think your way to freedom. You actually have to go through the process of making. There’s a very beautiful, metaphoric and symbolic power that occurs when we’re creatively intent, like putting our intention towards the generation of creative acts that are greater than ourselves.” Their work enacts freedom through the body and how and where it is allowed to move.

Cassils’ work spans across mediums; interrogating and exposing the processes of sight to challenge how and what we are made to believe through our visual experience of the world. They explore the power different mediums hold and how to ‘poetically extrapolate’ on these, allowing them to go beyond the basics of representation as a means of resistance.

They are “interested in using technology against itself in a way that showcases its capacity to frame and create empathy or apathy.” This focus is visible in how a work such as ‘Human Measure’ investigates the processes of sight to challenge how and what we are made to believe through our visual experience of the world.

And yet Cassils repeatedly resists the binds of definition, or a need for ‘proof’ of one’s existence. The bodies in the cyanotype appear x-ray like, yet non-medicalised. Instead, the messy, dripping, sweaty residue of the body is repeatedly left throughout Cassils’ work such as in ‘Becoming an Image’ or the ‘Human Measure’ cyanotype – which Cassils describes as “indexical of the choreography” in the way it captures the moment of impact of the bodies hitting the floor and lying prone.

In the performance a lighting rig is used to create a “perfect retinal burn” throughout the mostly dark set before the cyanotype is revealed. Cassils tells how they are “playing with the ability to expose, over-expose and over-inundate the physiology of the viewer. And to underexpose and then force them to look and then…what they’re left with is the only thing that’s ever made fully and truly visible – an outline.” I’m taken with this idea of burning an image into people’s minds and into history, and of reminding us that our perception of identity is still based upon outlines and images rather than felt and lived experiences.

There is a communality and healing nature to the work which moves through violence, fear and rage to create hope and catharsis both for the dancers and the audience. While Jasmine refers to the ‘punk’ ephemerality of performance that cannot be re-lived, Cassils calls it “grounded in the real…not ‘performativity with a capital P’”. Yet, Cassils uses ‘Performativity’ to embody the reality of challenging the various hierarchies our bodies are subjugated to, while also creating webs of solidarity and continual engagement that go beyond the performance itself.

I come away from the exhibition feeling overwhelmed, reminded of the violence repeatedly acted out on trans bodies and identities. While the statistics tell us that 2021 marked the highest recorded trans murders in one year, I am also aware of the inaccuracy of these due to previous lack of recognition of trans identity and the concealing of trans deaths, particularly of Black and Brown people.

Yet ‘Human Measure’ presents a resistance embedded in the stories that bodies can communicate; translating stories and histories into a more grounded and felt awareness in the body of the viewer. The experiences of violence woven into the exhibition are held in tandem with the hope of trans and gender non-conforming bodies holding spaces, caring for and supporting one another are still burnished into my mind.

I am reminded of the possibility for collaborative spaces of care for communal and self-transformation, of sensuality beyond a hetero-normative experience, and the possibility of retelling stories of the past to create modern day mythologies and frameworks for the body to be free within.

‘Human Measure’ is on display and available to see for free at HOME, Manchester until December 12 2021. Header image: Lee Baxter.