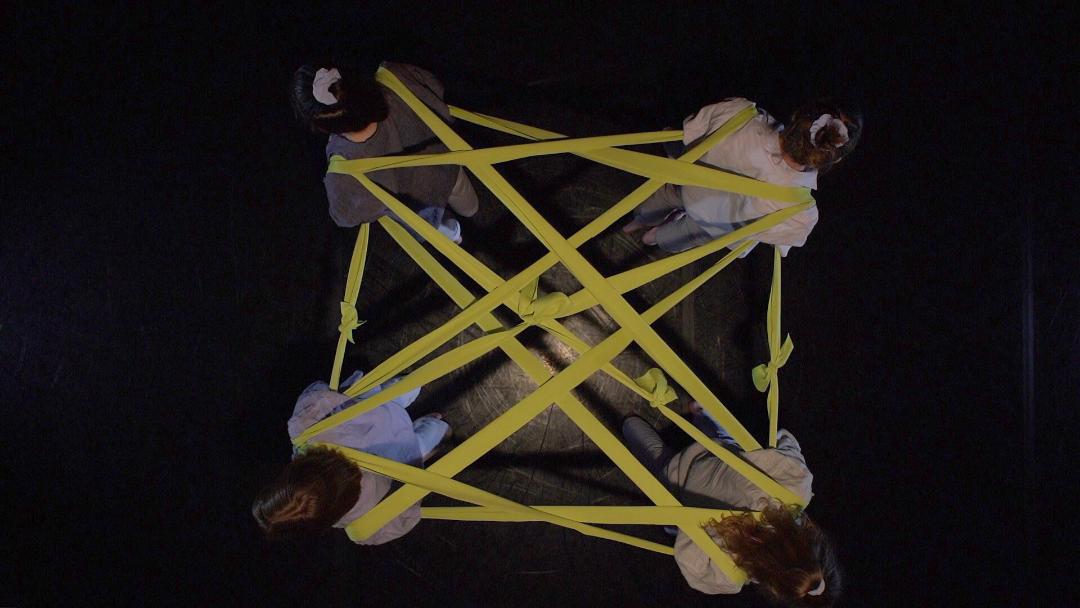 Please note that DAJ saw this performance on Wednesday 7th July during the week where only three of the four works were performed due to Covid restrictions. The following week the full programme of work was performed featuring the work of choreographer, Kloe Dean.

I have several friends graduating from London Contemporary Dance School this year. I’ve heard their tales of COVID disruptions — from online ballet classes in their bedrooms to fears that they may never be able to perform in person again. It was truly moving to see their graduation piece finally be realised, albeit in a COVID adapted form.

You Are On Mute debuted a trio of new works by three different choreographers, collaborating and devising with the third year LCDS students. Whilst each of the individual works had their own distinct approach, style and pace, themes of sound, materiality, communication and connection ran throughout the night.

‘Unfriending’ — the first of the trio of performances— was a film compiled from rehearsal footage after COVID prevented the live version last minute. Choreographed by Janine Harrington and several LCDS students, the film beautifully wove spoken word, movement, sound and fabric to create an ephemeral and delicate piece that was adapted seamlessly for film.

There was no musical backing-track, only the soft, subtle, sound of bare feet padding, sliding and stepping across stage, rising in volume and intensity as they moved faster and falling into a distant murmur as they slowed down. The camera focussed not on faces or whole bodies, but hands, heads, shoulders, feet and legs that strode and stretched between swirls of fabrics in bright shades of pink and yellow.

The dancers chanted “We fabricate connections” and “This is a one-way system in motion” as they arranged themselves into an embodied, interconnected organism of flesh and fabric. I was particularly struck by the video editing, which created a layered, palimpsest effect, as the previous shot remained faint in background whilst the new shot appeared. This layering made it even harder for the viewer to distinguish person from person and fabric from limbs. The overall effect was a piece that spoke of the materiality of connections, the visceral and sensorial part of friendship and intimacy, something that is perhaps prevented and transformed in the virtual.

Ideas of craft, feeling and fabrication trickled into the second piece of the night: ‘Jete Out of the Window’. Choreographed by nasa4nasa, the work took the form of a music playlist, with clips filmed and featuring five LCDS dancers, inspired by Fred Herko’s post-modern piece of the same name. The video displayed a YouTube screen page, with 39 clips running one after another, generating the sensation of scrolling endlessly through a playlist.

The clips captured the suspense and feeling of falling — one showed the doors of an elevator slowly closing, just in time to see a body crumple behind the doors, another displaying a silhouette of a dancer’s soft arm gestures and fluid movements. There was a touch of humour in the hyperbolic, emotive nature of the clips, with titles such as ‘crying’, ‘crying 2’ and ‘falling in love with myself’. More comic videos included a very short and poorly filmed clip of someone doing a jete in their bedroom followed by an inevitable ‘dramatic fall’ from ambitiously trying to leap in an enclosed space. The humour was carefully contrasted with videos which were very intimate and vulnerable, such as one named, ‘feel you’ displaying a lone dancer with their eyes closed and the faint sounds of crying. The series of clips captured the lockdown experience, the home-style videos communicating the conflicting feelings of boredom, loss, and desperation to escape, the juxtaposition of the mundane and the imagined.

The Youtube playlist format was really effective, and I appreciated that you could see the previous and up-coming video clips on the sidebar. Combined with the rather abrupt, jerky editing of the clips, the overall effect was synesthetic — a visual and auditory memory of emotions and relations.

In the final work, ‘Pure Comedy’, choreographer Jamaal Burkmar and a substantial collective of nearly 20 dancers sought to “create a universe” through a structured improvision to three musical pieces by Father John Misty. Performed via live stream onstage at The Place, the work embodied the multi-layered patterns, textures, and intonations of the music.

The tension between individuals and the collective carried the piece, as the dancers at once formed a coherent ensemble, and yet, interpreted the music through their bodies in distinct and personal ways. I found myself getting lost in the depth of the work as I flickered my focus between individual dancers, transfixed by the way they carried a certain instrument, rhythm, or tempo.

The performance had a pastoral, folk-feel, as the dancers were dressed in shirts, dresses, and dungarees in natural hues of green, yellow, blue, and brown. The movement was ceaseless. Even when carried by just one dancer, the movement never ended, like the vibrations of the jazzy, bassy, music that never quite died down. I found the pure movement of the work to be refreshing and bursting with energy, but it also had a compulsive, captive quality.

At the start of the second piece of music, the dancers started in small huddles across the stage, repeating fractured and disjointed gestures, such as wiping the floor repeatedly with their feet, or swishing their arms back and forth. The repeated motion evoked the dancers yearning for satisfaction or completion in their movement, yet something compelled them to keep on pushing. Even without direct, physical contact, the dancers performed perfectly synchronised duets and trios that wove in and out of another, erupting in unexpected ways across the stage.

I feel so grateful to have been able to watch You Are On Mute, after all the obstacles that have befallen the LCDS students this year. The show resonated with the experience that students of all disciplines across the country have endured — constant improvisation, hope, frustration and the urgency of connection, communication and companionship. Watching my friends, via a live stream on a laptop in my bedroom generated an odd sense of distance and closeness. It felt disconcerting that they had no idea I was watching. I couldn’t congratulate them after the show; they themselves were muted, unable to communicate with me, not even a glance or catch of the eye as they walked off stage. Yet, I had such a clear vision into their every movement, gesture and facial expression.