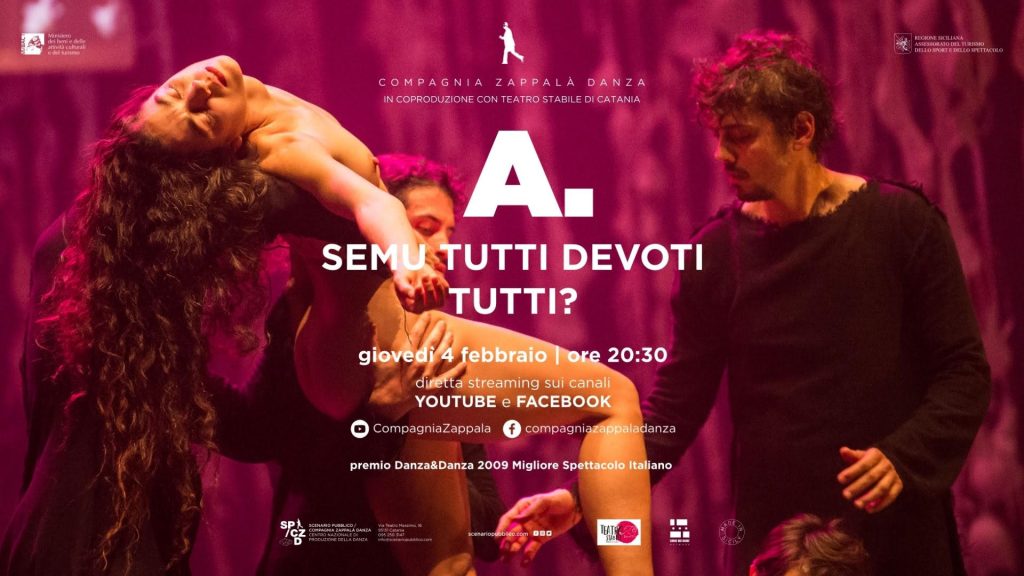 Roberto Zappalà – after having danced the choreographies of Kylian, Mats Ek and Birgit Cullberg, and collaborated with different companies – in the 90s founded the Compagnia Zappalà Danza. There he developed an intense research work and matured his own original choreographic language. In 30 years of activity, the choreographer has realised more than sixty productions which have toured throughout Europe, the Middle East, Central and South America and South Africa. He has also made creations for the Balletto di Toscana, the Scuola di Ballo Teatro alla Scala, the Swedish company Norrdans, the ArtEZ Arnhem – Netherlands and the Dutch Foundation Theaterwerkplaats Generale Oost Goteborg opera ballet. He also had the opportunity to leave his clear creative mark by choreographing the musicals “Jesus Christ Superstar” and “Evita”.

In recent years he has dedicated himself to the transmission of his own choreographic language “MoDem” through seminars held throughout Europe and overseas, to workshops on body language for the Faculty of Literature and Philosophy at the University of Catania and has published several essays. He is the director of one of the three Italian national dance production centres Scenario Pubblico in Catania, opened in 2002.

This year and due to the ongoing health emergency, one of Italy’s biggest celebrations the Feast of Sant’Agata in Catania will not take place as usual. For this reason the company, Scenario Pubblico, has decided to give the city and the whole of Italy an evening of commemoration for this important and heartfelt event.

On 3 and 4 February, the Compagnia Zappalà Danza and Scenario Pubblico dedicate two evenings in streaming to the figure and feast of Catania’s patron saint.

Question: What is the idea behind this event?

Roberto: On February 3 at 8.30 p.m CET, ‘In assenza’ (in the absence) will be presented, a documentary divided into two parts. The first, Prova sicura, consists of interviews and moments from the rehearsals of the show A. semu tutti devoti tutti? The second, Tra sacro e profano (Between the sacred and the profane), edited by Alain El Sakhawi, offers a suggestion of historical images of the famous Catanese festival. Having passed the first decade of the creation that Roberto Zappalà has built, on the grand feast of St. Agata, the third largest Catholic feast in the world, it was decided to create a testimony that would relate the many images conveyed during the show with the images of the feast, some of which were selected from the archives of the Istituto Luce and from the kind concession of the repertory images of Ciclope film.

On 4 February at 8.30 p.m. CET  there will be a streaming of A. semu tutti devoti tutti?, a co-production between the Teatro Stabile di Catania and Scenario Pubblico / Compagnia Zappalà Danza and winner of the 2009 Danza&Danza Award as Best Italian Show.

The “A” stands for Agata, the patron saint of the city of Catania. The martyr saint’s breasts were torn off as a punishment for refusing the proconsul’s advances. Catania dedicates a festival to her every year, which is one of the most important in the Catholic world. On that day, the city fills with a single pounding cry, “we are all devoted!” In adding a question mark (are we all devout?) Roberto Zappalà asks questions that disturbs and addresses the unspoken.

The single live performance is scheduled for 25 March 2021 on the stage of the Opera Madlenianum in Belgrade – with the translated title: ‘A.Jesmo li svi mi žrtvovani?’ for the Belgrade Dance Festival.

Q.Why work on a topic such as the mystic story of Saint Agata?

Roberto: This celebration is one of the most important for the city of Catania; for Sicily but ultimately for the entire Catholic world. As citizen of this city I felt that in a feast such as this one, often there is a mixture of the sacred and the profane and not everything is truly moved by the pure faith. Obviously there are many inspirations that come from different moments, especially from suggestions belonging to everyday life. I am a choreographer who often deals with social issues. Through choreography it is not always easy to denounce or give a precise meaning. My collaborators and I are inspired by what is happening around us; it is not by chance that these projects are a reflection of Sicilian life. A reflection on Sicilian men and women, but above all on their bodies! We also deal with religion, the Mafia… so the inspiration comes from the daily context. More rarely I let myself be influenced by music, but it happens.

Q: How important is the story behind this work?

Roberto: In our performances we do not tell stories, but we try to impress so that the real story is told by the audience. I think that is a feature of contemporary acting, because it does not suggest stories, but leaves the audience to create their own story through suggestions that we as artists create on stage.

Taking care of the details, combining music, dramaturgy, light, as well as the time between scenes, the time of interrupting an emotion or the extension of that emotion, are all part of a unique choreographic idea. In accordance with that, I always personally deal not only with choreography, but with lights, scenography, music, costumes, so for me, composition is a combination of all these elements. I have to feel all the parts of my work, so it’s hard for me to let others do the scenography or the lighting.

Q.How do you feel having a work that will be live streamed rather than performed on stage?

Roberto: I think streaming, if used in a very specific way, can be a great tool to share work. Having said that I still prefer having the audience in the theatre and the dancers on stage. This piece was made for the stage and so it will not have the same atmosphere.

Q: How do you describe your language and how important is Sicilian music and tradition in your work?

Roberto: I have great respect for music and all artistic expressions. For me, the quality of music is important, regardless of whether it is classical, jazz, contemporary or pop music. Of course, it has to be the perfect frame for my work, as is the picture frame, because it makes the picture better. The moment when I choose music is very delicate and I often look for original music made for my piece.

An important part of my language is the moment of decision where I will place that particular music in the performance, with what rhythm, tempo and what kind of music I will choose. Of course, first I choose the dramaturgy, the idea for the play and only after that the music that is adapted to my dramaturgy. In this piece, as in many of my works, there is an interaction between contemporary, classical and Sicilian tradition, and this is the essence of my project Re-mapping Sicily in which we have tried to explore different aspects of Sicilian spirit and tradition through modern language.

Q. How has the pandemic affected Zappalà Danza? Did the company work during 2020?

Roberto: Theatres in Italy are still closed. We had the first closing in March 2020, so we were open for a few months during the summer when we could perform. We had to close everything again in the fall. We had to cancel all the performances of our company and the whole season in our theatre in Catania. We still don’t know when we will be able to perform again. Of course, we have the financial support of the government and we have permission to practice. We have been working on some new projects, but it is very difficult to rehearse without the idea of ​​going on stage. This is a difficult time for all freelance artists, technicians, etc. who do not work due to cancelled performances. I didn’t want to create special video projects conceived in the spirit of COVID because I genuinely didn’t want to feel compelled to do so, just to show that I was active. I am always optimistic and I think things will change in a positive way soon.

During the closing in 2020, we worked on my new piece that uses Bach’s music. We were supposed to have a premiere in June 2020 in Singapore, and then in December 2020 in Catania at the Teatro Massimo Bellin. Both performances were cancelled due to COVID. The piece is ready and we are talking about the premiere during the summer or fall of 2021. I also worked on the new site specific project called Panopticon and I hope the premiere will be at the Museum of the Ursino Castle in Catania.

Q: How do you see the future of performing arts?

Roberto: I don’t know, the future always depends on a given, certain moment, on the research that someone is doing. When it comes to the game, I am concerned about very young artists in pursuit of the artistic X factor. Sometimes it seems to burn out those artists because everything moves very fast and they don’t have the support or time to develop and create. They are often lost. This is especially happening in the game, perhaps in the whole of Europe, not just Italy.

But I believe in the future, there are many languages, the promiscuity of language, the intertwining of contemporary arts, the passion for film, the visual arts, which often meets the passions of choreographers and directors. Among all the arts, the play has developed more over time than the others, and that is why theatre or visual art find inspiration in contemporary play or movements created by choreographers. I have confidence in the future of contemporary and performing arts.