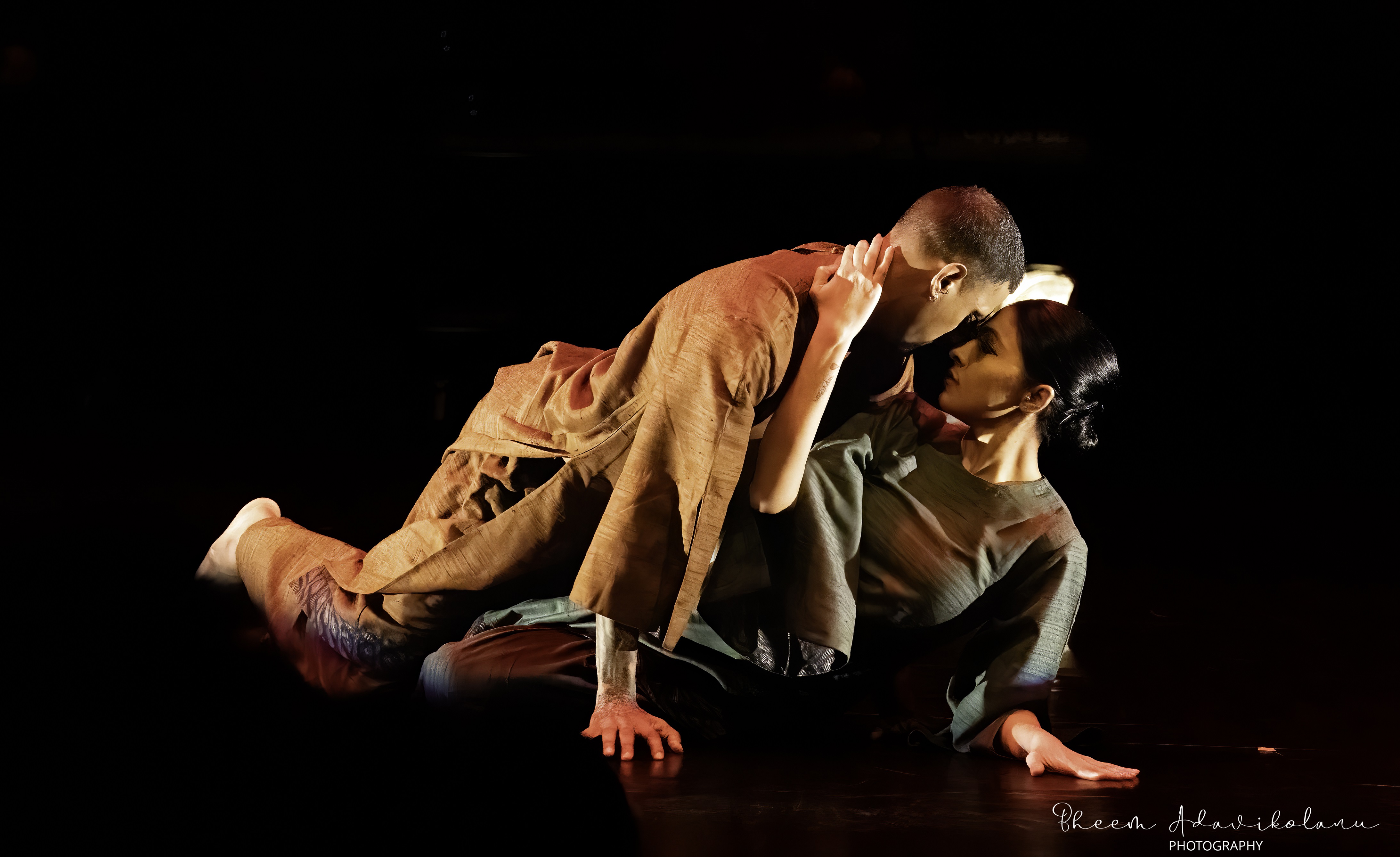 The tinkling of Indian rattle anklets — known as ghungroo — settled in the darkness. In the slow ascending light appeared a blend of warm and brightly coloured costumes, well-pronounced make-up, and the bright smiles of the dancers, delighting the eye of the audience with the aesthetics of the Bharatanatyam and Kathak tradition. Musicians and vocalists accompanied the dancers on stage throughout their journey, merging the tradition of classical Indian sound with a modern westernized one through rhythmic and melodic experimentation. Saturday, April 2nd marked the triple bill performance SEVENS, by leading UK choreographer Nina Rajarani at The Place, London.

The first act immediately presented a flirtatious scene — joyful and carefree — between young people who, through sparkling pirouette and quick Kathak footsteps sought and avoided each other. It gave the impression of the first phase of a relationship, each partner entering in with the intention of not letting the flame fade away. It brought me back to old adolescent memories and then to more recent ones, to the moment the eyes light up when seeing someone for the first time. Typical of most crushes, it’s that person who captures our attention, accompanied by pleasant emotions and a sense of timelessness.

At the end of the evening during a post-show talk, Rajarani expressed her intention to represent our current reality through the sudden changes of partners in the space: people search for partners in a constant frenzy, and today’s virtual world offers ease compared to a few decades ago when it was unimaginable to find someone for even just a few fleeting hours.

The second act ignited with a long, virtuous braid of hair and the distinct red colour painted on the bare feet of the protagonist, a woman so feminine as to transmit the energetic power of fertility. She seemed to evoke the mythological characters from Indian epics, typical of the notable artist Raja Ravi Varma’s paintings. Fixed upper torso, bent knees and angled arms, defined characteristics of Bharatanatyam style, were the centerpieces of Nina’s dance as she occupied the stage with elegant movements and an unconditional smile. The call of mudras was often present, in which she communicated through symbolic gestures with the fingers and palms of her hands.

Vocalist and composer Y Yadavan accompanied her ritual, walking with her on stage as her harmonious protector and her guide. He turned toward her with an everlasting gaze, unconcerned that his back faced the audience as they remained pleasantly captured by the love story in motion. The sound of his a cappella singing made me recall the melodic mixture of mantras chanted during yoga sessions and the singing of Hindu prayers. I was able to give meaning to my reflection when in the talk Rajarani mentioned that this section portrayed the Hindu marriage rite of the seven promises called Saptapadi. Saptapadi is when wife and husband, with each step, make mutual promises in honour of a happy and fulfilling marriage. To what extent can this type of promise be fulfilled with a ritual, if I might wonder?

The atmosphere of this final act translated into another type of emotional and communicative environment. The smiles of the dance ensemble constantly present from the beginning faded into more serious, concentrated gazes, turned inwards to their souls, almost in a meditative state of connection with themselves. The colours of their clothes traded their brightness for softer pastel shades, beautifully mirroring the new situation created. Sensuality and sexual instinct were the main elements to open this act: two dancers — a man and a woman — intertwined in carnal movements on the ground where even here you could feel a hint of those role-playing games between those who lead and those who let themselves be guided by their lover. In this case, the woman appeared more predominant in wanting to guide the sexual act herself.

This beginning scene resonated with my reminiscence of shame and embarrassment of when, as a teenager, I faced certain topics with my mother, who, coming from a strongly Catholic religious background, lived a life forged by heavy feelings of guilt. This was typical of many religions based on the sense of guilt and therefore on fear, as a powerful manipulative tool for the people. Rajarani was highly successful in her purpose to choreograph this last section, with an empathetic view of what we see as sinful and of what we judge as right or wrong.

This duality has been explored in all forms of art and is reflected here in the meticulous and experimental use of sound; in fact, the echo of the opposing voices at the beginning of the third act made room for the instrumental and vocal music to follow. It gave life to the vibrations — as abstract as they were rhythmic — that fit perfectly with the fusion of Kathak and Bharatanatyam. I did not notice any judgment in this performance; rather, it was the interpersonal listening that dictated where the movements of the dancers became more fluid and refined. Within and between each dancer was a journey of research and acceptance rather than of condemnation and fight.

~The heartbeats are the ones that kick off the beginning of life, they are the ones for which music was born. The beat is what made this performative picture come alive thanks to the constant presence of the ghungroo at the ankles of the dancers who, with great skills, became the percussionists banging their heels on the ground. As their drumming resonated with us, a woman of the audience perfectly associated it with the beatbox of rappers, where the groove is the basis of everything. SEVENS was a tale of sin and song, passion and paramours. A vivid life-painting in motion.