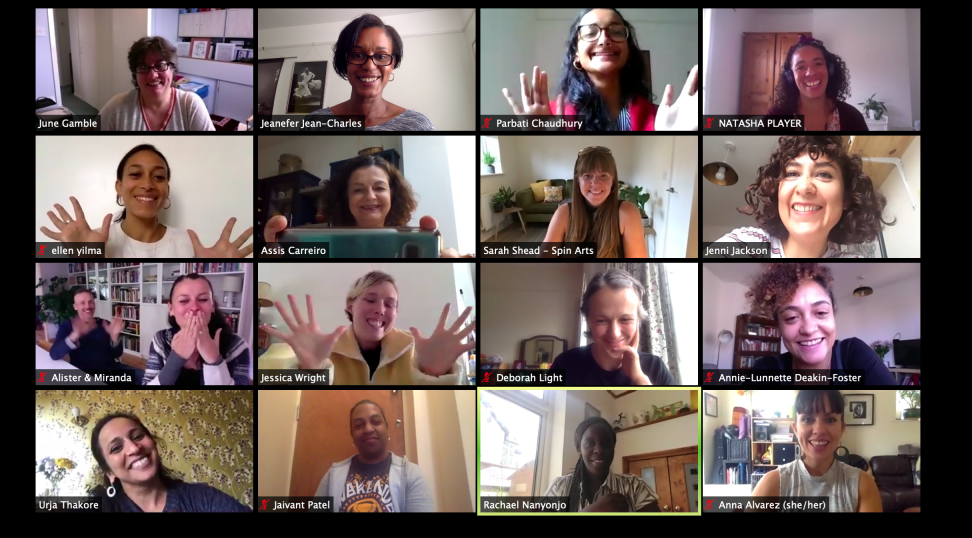 The pandemic and all the activism it enkindled certainly forced many moments to their heady crises, not least the need for better support for freelancers. Given the precarity of being freelance during multiple nationwide lockdowns, this support was undoubtedly imperative. According to a study by Creative UK, freelancers were hit more than five times as hard as workers on payroll.

But with many unions and membership bodies requiring a fee for freelancers to get what they need, what independent group could step up and deliver the goods that freelancers required? Enter the Dance Freelance Taskforce (Dance FTF), a collective of self-elected individuals from across the dance industry focused on creating a more equitable sector for all.

A subgroup of the larger Freelance Taskforce, Dance FTF created a space to target freelancers’ biggest concerns, with a view to provide solutions and frameworks that would enable independent artists to feel better supported.

Dance art journal sat down with Dance FTF members Natasha Player and Alister O’Loughlin to chat about the taskforce, the actions it took towards fairer pay and anti-racism, and its future.

Q: Thanks for chatting to us, Natasha and Alister! Could you tell us why was there a need for Dance FTF?

Natasha: We’ve done some research into why a collective such as the Dance FTF is continually needed and found that 86% of freelancers have accepted work at a level of pay that makes them uncomfortable, with 76.9% saying they are unhappy with their current rates.

Alister: With these statistics in mind, you can see why there was definitely a sense that proactive and reactive change needed to happen!

Q: How did you identify the issues that needed to be targeted?

Natasha: Firstly, we needed to hear from the people in the industry. We built up a database which had over 400 people. We set up coffee breaks where we started to connect, sent out surveys to hear what was pressing for everyone and whether it reflected our lived experiences as a collective.

Alister: I think that lived experiences is a key thing here. As a collective, Dance FTF made sure our lived experiences reflected the freelancers we were helping. It was also a big factor in determining who would take on tasks.

Natasha: Once we collected the data, this propelled us forward to connect with other networks and groups such as the Black and south Asian dance community, which we connected to as part of our anti-racism and inclusion group.

Q: Although the Dance FTF is on hold for now, there are hopes to continue doing the work you’ve done. What were the key elements of the work that came out of Dance FTF?

Natasha: The key elements of the Dance FTF include the 5 Guiding Principles document, which is a fair-trade model for freelancers, IDEALLL, an anti-racism resource, the Anti-Racism and Inclusion Index, Pay structures for dancers and the National Portfolio Individual/Artist proposal. Aside from these initiatives and resources, we’ve also delivered practical workshops and run sessions on taxes.

Alister: It’s important to remember that there isn’t a designated HR department for freelancers, and this is what our resources and initiatives offer: providing specialist advice and support that don’t come at a financial cost.

Q: Would it be helpful to give a breakdown of some initiatives, starting with the 5 Guiding Principles?

Alister: Sure! The 5 Guiding Principles are fair pay, inclusion, transparency, representation and sustainability. The principles are a framework designed to encourage better practices when organisations and freelancers work together.

We felt there was a need for this framework because of two things. Firstly, there is a lot of talk that pits organisations and freelancers against each other and we thought that was quite destructive and negative. We have experienced working in organisations as freelancers and wanted to make everyone feel supported as part of the same ecosystem.

We decided to create a principles framework as it felt more accessible. Rather than setting up a series of demands we wanted something that was open. As soon as you put any fixed targets in place it feels concrete and gives organisations a reason not to adopt. If we articulate it as principles however, it feels more flexible.

If an organisation wants to adopt the 5 Guiding Principles, there isn’t a fixed route or method per se. They have to have a conversation with a representative group of their freelancers in which — in the simplest form — they create a list of two bullet points for each principle — one for what they’re doing now, and one for what they’ll do going forwards. It gives them a framework to work on and improve these areas.

One of the first organisations to adopt this was Dance Base in Edinburgh. Dance Base asked us to broker a conversation between them and their freelancers. It was an amazing conversation that was wide ranging, refreshingly candid but also extremely productive. The discussion was about the programming of artists and using studio time — something that affects freelancers. Neither side had the chance to discuss this in depth before and it gave them all a chance to address issues together.

Something like the 5 Guiding Principles is empowering for freelancers as they can have these conversations with councils or organisations whilst feeling supported. It gives them a springboard and a framework to work from — a language to start an important conversation on transparency or fairer pay.

Crucially, it gives freelancers the opportunity to be in control and choose how they work; they don’t feel like they’re walking into pre-existing structures where they must operate in a certain way.

It is encouraging that artists have this voice now, and the ones that are coming into the sector feel more empowered than we ever did.

Natasha: Another activity of the Dance FTF was the National Portfolio proposal, which was all about devising models to better support freelancers through more sustainable grants. We reached a point where we were able to have a conversation with Arts Council and made a proposal to them. We collected lots of evidence and had the likes of Sharon Watson MBE, Principal of Northern School of Contemporary Dance and Tarek Iskander, Artistic Director of Battersea Arts Centre to speak about their experiences as freelancers and the difference a sustainable grant would have made to their careers.

Anti-racism was the basis for a further initiative. The beginning of pandemic and the Black Lives Matter protests highlighted the huge racial inequalities in the sector. At Dance FTF we wanted to see what we could do to create change and voice any issues.

We used this impetus as a driving energy to see how we could build resources that people could turn to. Annie Lynette Deakin Foster and I created the Anti-Racism and Inclusion Index which identifies cross-country initiatives, resources and best-practice examples within the arts. It’s a live document full of resources that can be added to. We very much see it as something that the community can share and grow.

The IDEALLL manifesto is another component of Dance FTF’s anti-racism work. It’s a working practices draft document addressing anti-racism and advocating for inclusion practice across dance and movement sectors.

IDEALL can be adopted and used in various contexts including studio time where there is a need for more listening and respect of other artists’ voices. Sometimes we just see things through our lens, and so it’s about changing that slightly, so we hear everyone’s experiences. This helps build a better environment and create a diverse narrative.

In this context, IDEALL has been a powerful tool to open-up discussions — to see how we can work with each other, and how to navigate power dynamics in the studio.

Q: Was it difficult to challenge the established processes in arts organisations?

Natasha: It was that time where dance organisations were open to more dialogue. They wanted to have conversations about how to support freelancers. For this reason, it was important to identify the challenges and then map them and move forward.

Alister: All those organisations seemed poised to listen in that moment and it was amazing. In some ways it feels like that feeling can’t last in the same way — it felt like a critical mass. However there have been changes, perhaps not as much as there could have been, but it is a slow ship to turn around.

Some organisations decided to take an initiative of ours forward, yet it does take time for them to interrogate and understand how they might affect change. We will see what happens in due course.

Alister: We were at a point in which we wanted to start lobbying for the pay guides for dance practitioners. The existing ones don’t really cover the breadth of artistic practice that is actually in the dance industry; the models are centred on West End work which is very different to the reality we know.

We were told, however, that only unions can lobby for pay rates and anyone else is a cartel. Basically, it is illegal for freelancers to campaign for better pay for freelancers. We have spoken to unions about this, but freelancers can’t necessarily be part of unions if they aren’t being paid properly. It really illustrates the madness of where we are! People Dancing and One Dance are aware of it so hopefully it can go forward. As you can imagine it has been a journey!

Q: What would your advice be to freelancers?

Alister: As a freelancer myself, I would really encourage you to take time to think about what you need. One of the big lessons that I have learnt from Dance FTF is that freelancers are unique and are supportive of one another. People will talk and offer support to get you where you need to be. Organisations can’t magic money out of nowhere, but they can offer resources that you need whether that is printing or social media advice.

There also needs to be a shift within the industry to recognise that freelancers need support at every stage of their careers. As a sector, we need to understand that vulnerability as support is always needed. Now is a good moment to ask for support — and Dance FTF’s 5 Guiding Principles are a good place to start, providing a reference to look at fair pay, transparency and being involved in decision-making with institutions.

Natasha: You covered lots there Alister! For me it’s building your networks and looking at who is around you. People may be different to you but be brave and make connections. Go out of your space and try something new to feel empowered. Challenge the system in terms of what you need. For freelancers it means negotiating your needs and learning how to do that. I can feel this in young creatives in what their expectations are.

Header image is a screenshot of the Dance FTF members on Zoom. Headshot of Alister’s photographer credit: Richard Baybutt.