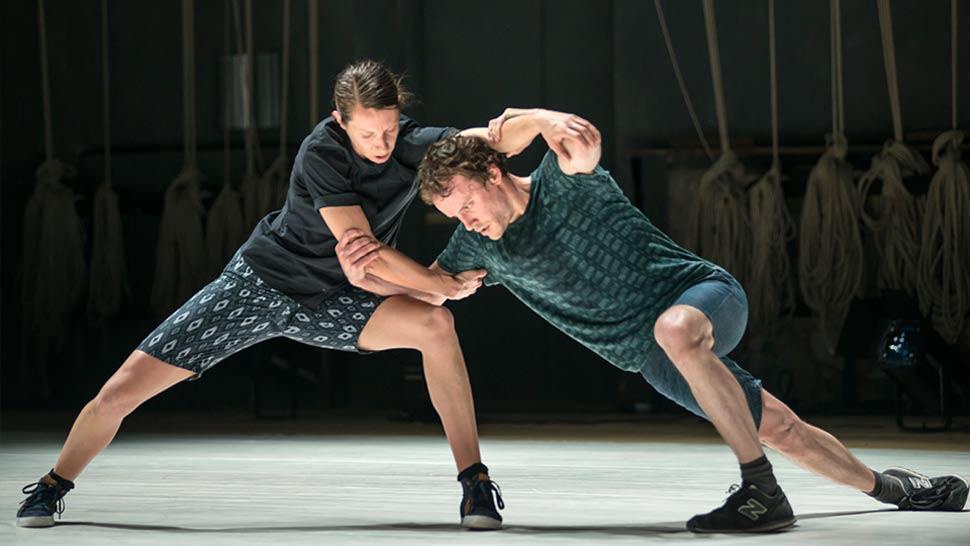 I’m going to start by saying that myself and almost the entire audience stayed until the very end of ‘FOLK-S: Will you still love me tomorrow?’ by Alessandro Sciarroni. Sciarroni presented the work in Perugia at Teatro Morlacchi along with six performers.

‘FOLK-S – Will you still love me tomorrow?’ does not have a predetermined duration. It is a mechanism designed to proceed to the bitter end, which leaves the audience free to leave whenever they want, but goes on as long as there is at least one spectator in the room or a dancer on stage.

Alessandro Sciarroni is an Italian artist active in the performing arts with several years of training in the field of visual arts and theatrical research. His works are presented in contemporary dance and theatre festivals, museums and art galleries, as well as in unconventional spaces, compared to traditional venues, and involve professionals from different disciplines.

Among other awards, he was awarded the Golden Lion from the Biennale of Venice for Lifetime Achievement in Dance in 2019. His work starts from a Duchampian conceptual framework, makes use of a theatrical installation, and may employ some techniques and practices derived from dance, and from other disciplines such as circus and sports. In addition to the rigor, coherence and clarity of each creation, his works try to unveil, through the repetition of a practice to the limits of the physical endurance of the interpreters, the obsessions, the fears and the fragility of the performative act, in search of another temporal dimension, and of an empathic relationship between spectators and interpreters.

His creations have been presented all over Europe, in North and South America, Middle East and Asia. Among the main events, he took part in the Biennale de la Danse in Lyon, Kunstenfestivaldesarts in Brussels, Impulstanz Festival in Vienna, Festival d’Automne and Festival SÃ©quence Danse del 104 in Paris.

In 2012 he started working on the trilogy ‘Will You Still Love Me Tomorrow?’ that began with the first show FOLK-S, followed by UNTITLED_I Will Be There When You Die (2013) and AURORA (2015). Referred to as the “trilogy of practices,” this series of performances reflects on the concepts of effort, resistance and concentration and is based on the research of the archetypal system of performative signs of mankind, identified by Sciarroni in three practices: folk dance, juggling, sport. It is a trilogy of work that earned him international recognition.

FOLK-S is inspired by the Schuhplattler (shoe-beater), the Bavarian and Tyrolean dance that consists in beating one’s own legs and shoes with one’s hands. This work comes from research on traditional folk dance and Sciarroni has experimented with a particular method of choreographic creation, which he has defined “performative practice”.

In ‘FOLK-S – Will you still love me tomorrow?’ the ancestral form of dance is taken as a paradigm to which the performers adhere to, as if moved by another will. The movement and folkloric-thought undergo a radical metamorphosis, which moves between the reiteration to infinity and the “explosion”.

Darkness on stage. The spectators are welcomed by six blindfolded dancers gathered in a circle, who produce sounds with a rigorous and sometimes aggressive rhythm. After a first session, the dancers remove their blindfolds and recognise each other, the steps become clear and recognisable and at the end of the first choreographic sequence one of the performers, Marco D’Agostin, makes a statement to a microphone: “this dance will exist on stage as long as there is only one spectator left in the stalls or one dancer on stage”.

This statement is a challenge, a provocation, a declaration of intent: Sciarroni puts himself to the test, performs an act of courage not necessarily understood and appreciated by everyone, but he is certainly not afraid to question himself and to dare, to go beyond.

The group then resumes dancing, until – at intervals – the loop of movements is broken by improvised interludes, a sort of short circuit, an interruption of the flow: brief moments of extreme beauty that break the pattern, giving us the opportunity to discover the emotions that are hidden behind the bodies of the dancers who touch each other, explore each other, an intimate moment and at times almost poetic, lyrical. The circle opens and closes in a perpetual motion, at intervals a performer in turn reaches the console placed at the side of the stage, to activate musical tracks, ranging from chamber music to pop, from contemporary classical to techno, a sort of eruption, an incursion that the “real” world makes in this temporal limbo masterfully created by the six dancers.

Right from the start, everything is all too clear. We perceive the intent of this operation that separates the choreographic logic contained in a traditional dance from stereotypes and superficial exoticisms. But we immediately feel how the spectacular mechanism soon exhausts its own energy, which – and perhaps this is the most interesting element of the entire work – passes more through the sound dimension than through the visual one. The dance of ‘FOLK-S’ is all about rhythm and percussiveness, but it dies out at every repetition without acquiring charm, power and depth.

What gradually grows, however, is a sort of crazy tenacity of the performers, which seems to push them to blindly go beyond their limits, staying on stage as long as they have the strength and, as fatigue and sweat increase, also to wink at the audience, making it dangerously an accomplice and friend. And so the rigour of the choreography becomes more and more empty, reversing itself into its opposite, allowing a virtuosity and a fatigue to emerge that are more and more evident. A fatigue that is too much, but not enough.

The circle opens and closes, like a big animal engaged in deep breaths, someone reaches every now and then a console placed at the side of the stage to activate musical tracks at will, from chamber music to pop, from techno to contemporary classical, signals of a world that in the meantime evolves and at the same time elements of disturbance, of distraction.

But in the meantime, the ritual continues. The aerobic steps are exhausting, the sweat on the bodies is in sublime contrast with the smiles on the faces of the performers, determined not to give up. The audience empties out, but those who remain are caught as if in a spell; divided between the amazement for the precision of such tiring gestures and the contemplation of our immobility as spectators, we observe the author’s reflection take shape, until the long-awaited moment when only one performer inhabits the space.

The idea of staging the passage of a tradition and the weakening of the roots that would make it a sharp cultural tool is composed on stage as a subtle reasoning around the concept of vision. Under the tight attack of movements and above all of rhythmic sounds, time and space open up to another dimension, a fairy circle in which eyes and ears cannot stop dancing. The result is an extraordinary empathy between stage and audience, conquered with the courage of a leap beyond conventional rhythms. Beyond any category.

Sciarroni, through the recovery of traditional dances, offers us the opportunity to question ourselves about our cultural roots: their development and perpetuation, decontextualising them culturally and geographically and creating a bond between the performers and the public. Initially it is skeptical, alternating moments of curiosity and irritation. Some spectators, believing they are witnessing an endurance challenge, leave the theatre rather early, others perhaps not too involved or bored, leave quickly before the show ends. Those who stoically resist until the end, as they are enraptured and passionate by this choreographic experiment, have the opportunity to feel the strength of the group, the special bond that unites the individual dancers, who meet in the stage space when the circle opens and the rows break up. Progressively the rhythm becomes more pressing, the steps become more and more exhausting until the expected moment when only one performer remains on stage.

Sciarroni has succeeded in unhinging conventions and schemes, giving life to “something else”, to an unclassifiable work, outside the box, which in its simplicity, manages to be original and immediate, which disorients the public and forces it to come to terms with its communicative urgency, providing multiple possibilities of reading and fruition of its artistic act.

‘FOLK-S- Will you still love me tomorrow?’ is something between a show and a performance, an enigmatic, captivating work.