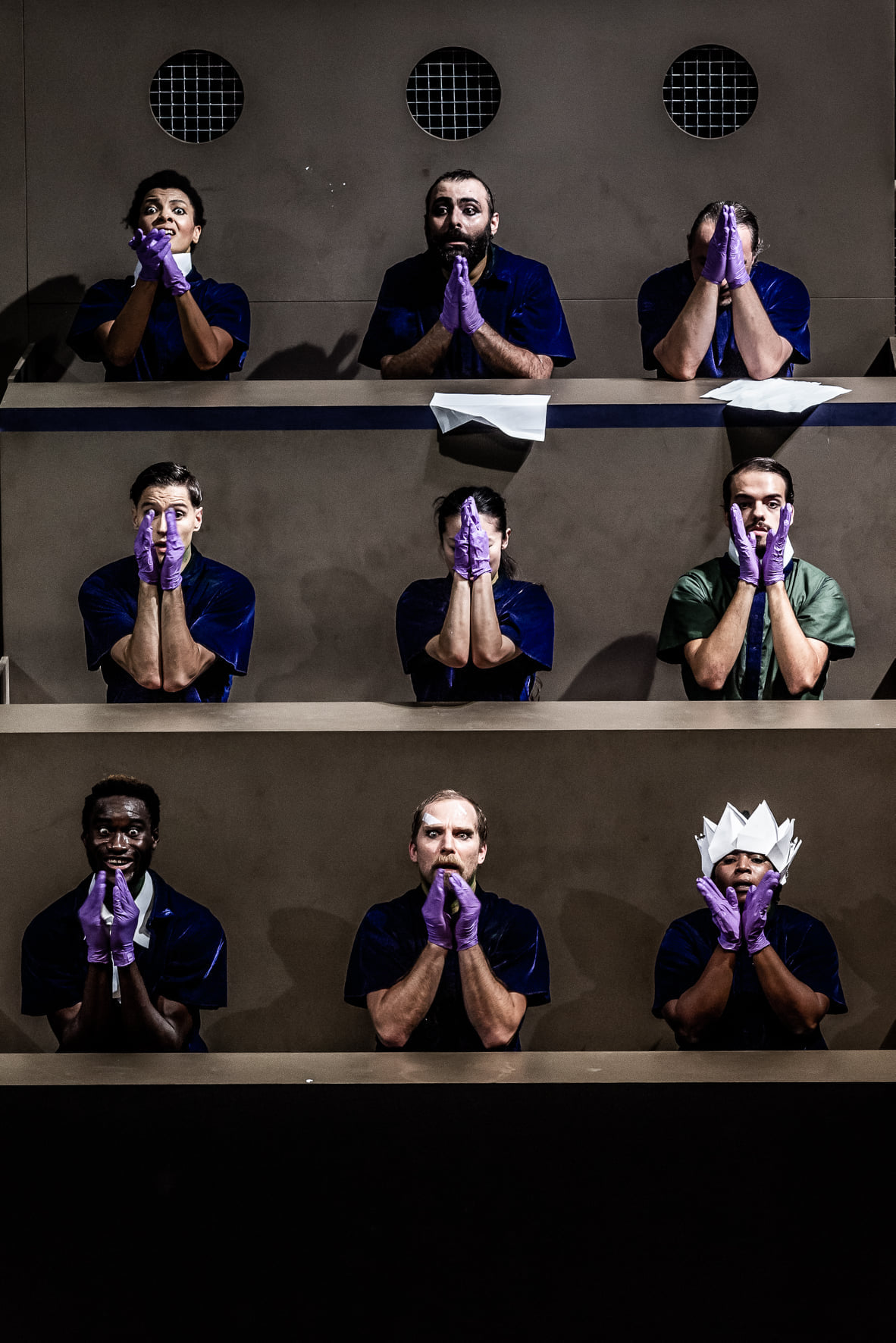 Eighteen months since the last time I went to see a live performance, I step into the large entrance of Teatro Municipal do Porto (Rivoli) for an exciting return to the theatre. Not only I am happy to experience dance on stage again, but mainly because Marlene Monteiro Freitas has been fascinating me since I first saw a video of ParaÃ­so – ColeÃ§Ã£o Privada (2012). The intensity, expressive and absurd nature of human behaviour comprise the work of Freitas, awarded with the Silver Lion from Biennale di Venezia in 2018. In this production, the Cape Verdean dance artist jumps onstage with seven dancers to perform Mal – Embriaguez Divina, where she explores the multiple shapes of evil in our world, which can be inspired by creatures such as witches or demons, colonialism, the holocaust, or even by the feelings of pain, pleasure, horror or emptiness.

As soon as the white canvas raises, our attention is immediately dragged into a military face-covered figure. Quietness takes over the scene. By the sound of shots and cries, a succession of minimal yet expressive steps aligns the dancers in an army parade, while high-energetic music plays out loud. “You fucking look at me” – says a voice in the background – and we look, inevitably, right in the eyes of Marlene; those eyes that tell a story of pain, aggression and hallucination and the most expressive eyes I have ever seen on a stage. The fast-paced transition of short and intense gestures creates the illusion that we observe robotic creatures instead of humans. The absurdity of the movement, the detailed facial expressions drives away from the expected dance, to open up the space into an experience of incorporation.

Considered as one of the greatest talents of her generation, Marlene Monteiro Freitas uses transfiguration as a core aspect of her choreographic work, that invites the audience to deconstruct the expected “contemporary European dance” – as Portuguese researcher Alexandra Balona writes – to reinvent the body through a methodology of imagery, references and contradiction. Creating weirdness, discomfort and electric realities, Marlene opens new paths in the current contemporary dance spectrum to represent human behaviour.

The dancers sit down in a rostrum at the centre of the stage and navigate into a sea of papers to build religious symbols, guns, or childish houses. This cartoon-ish assembly oscillates between the euphoria of kuduro movements, gestures of shotguns and restless mouths that smile, sing and scream. The demoniac evil is represented by a diverse range of bodies of this performance: the athletic body, the old body, the male and female body. In fact, this diversity of bodies is what sticks us into reality, while we are taken to another dimension that closes our relationship with what happens on stage – we are there, we resonate with the powerful music, we collapse on the violent references and we cannot stop looking into their eyes, until the end of this one hour and forty-five minutes performance.

Marlene is unconventional, fierce, disconcerting. Mal – Embriaguez Divina is an experience of embodiment beyond the being. It is a script conducted by the small details, where the big picture is translated into our own senses. It is looking into society from the outside, as a way to understand ourselves. It is an unforgettable experience. It is keep looking into the ecstatic eyes of Marlene, even in the final bow and audience ovation.