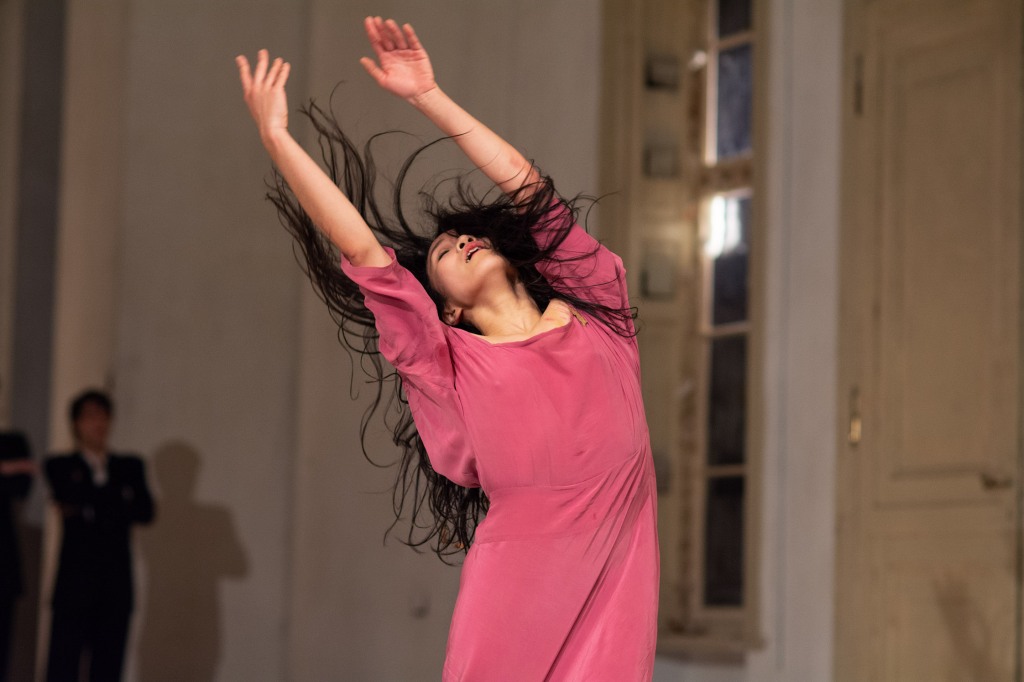 After 25 years without performing Pina Bausch’s 1977 masterpiece, her company returned to Sadler’s Wells to debut Bluebeard. While Listening to a Tape Recording of Béla Bartók’s Opera “Duke Bluebeard’s Castle”. Considered as the turning point in Pina’s career, Bluebeard was unlike anything else she had created before. The raw movement, the crushing expressions and the realism of emotions defined a path in dance theatre that marks Pina’s work. This search for translating the human condition into movement – as it is – is not ordinary at all, and that is why Pina will never be a cliché.

Filled with autumn leaves, the stage was turned into Duke Bluebeard’s castle: an empty room where only a portable tape recording is cast into a wheelable black block of a table. The duke and his young wife, the pink-dressed Judith, share a hug interrupted by the sound of Bartók’s opera. The music is manipulated by Bluebeard on the recording during the whole performance, with episodes of rewinds, loops and silence. And the choreography reacts to that; the conflict and anger collide with the tiredness of carrying each other across the floor. After this first scene, the ensemble of dancers takes to the stage to intensify the visceral feelings of Bluebeard and Judith’s (and to some extent every) relationship.

A strong sense of tension leads the narrative, which makes us dive into Pina’s universe of love and hate. Physically moved by the exploration of personal relations, the Tanztheater Wuppertal Pina Bausch retells a story which never gets old. Bluebeard comprises duets of women and men with blinks of cries and uncomfortable stillness. It is an attempt to understand connections in a world of possession, abuse and empowerment. The female figure is also key in the piece. The dancers have their faces covered with their hair, while they undress and redress themselves multicolour baroque dresses. They face a duality between their own nature and how a woman is expected to look – or to be. They do not know how to behave in this dysfunctional world; neither their partners, who also scream, laugh and fall down, crying against the walls. Alternating between tenderness and dispute, the couples easily get in and out of the shadows that relate them to each other.

This brutal expression of reality is one of the greatest legacies of Bausch. The paths she walked in to achieve it make her aesthetic so unique. Bluebeard also highlights her willingness to capture an intention through the movement – gestures and sequences are persistently repeated which make us familiar with her repertoire. Flashes of her iconic Café Müller (1985) are being drawing during this piece, which invites us to travel through her timeless career. This is the universe she invited us to cohabit with. After seeing one of the Pina’s pieces on stage, she will definitely never leave us.