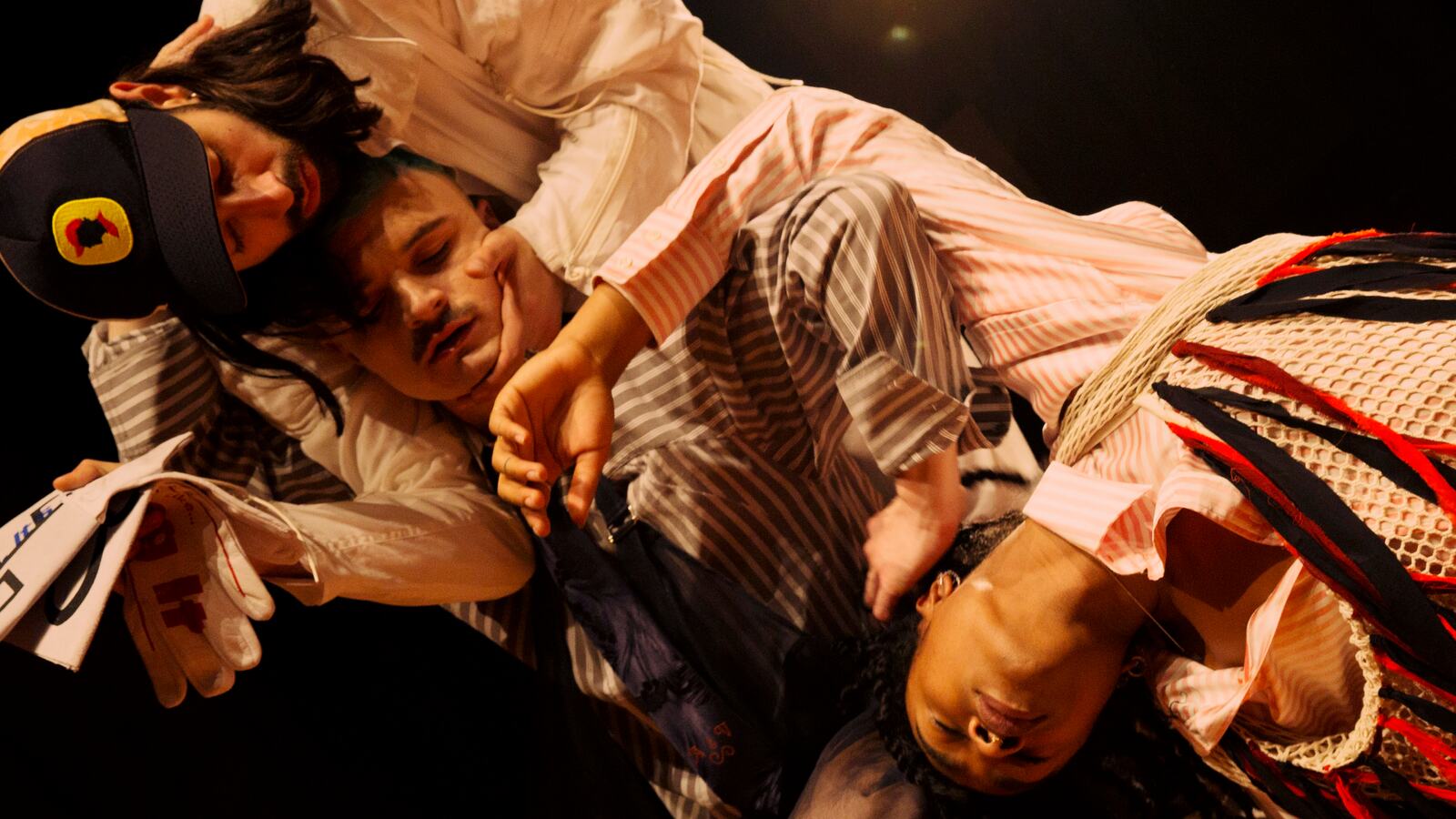 Following the sell-out success of Holly Blakey’s ‘Cowpuncher’ in 2018, Blakey is back with an updated ‘punchy’ and eye-catching spectacle. The new version, ‘Cowpuncher My Ass’, as the title suggests, is not only a continuation of the Cowpuncher theme but also implies there will be ass. Arguably more ass than Cowpuncher, the nudity is in your face (a shock to some), yet I found it neither offensive nor awkward, after all, it is just another body part. Blakey’s subversion of conventional norms on the stage and choice to display typically taboo and raunchy images, questions why indulgence and sensuality, a commonality for us all, finds itself restricted to the private rather than public sphere.

‘Cowpuncher My Ass’ has an abundance of character and rapturous spirit. The clan of seven extraordinary dancers reveal themselves initially in edgy, fashion forward outfits. Designed by Andreas Kronthaler for Vivienne Westwood, they are appropriate with the current awards season and approaching fashion weeks. Combined with serious expressions, no matter how silly the movement is, the dancers are likened to models. The dancers’ attack and commitment to the work is flawless. Their gestures start slow and discrete; soloists are picked out from the group to perform intricate phrases which blend into an onslaught of highly skilled partner work, exemplifying dominance and the desire for control.

Gradually, the choreography becomes denser, more rapid and continuous. The performers defile audacious and erotic sequences whilst also throwing themselves into explosive head-banging and wild nightclub raving. Though the Wild West referencing is kept rather elusive, some sections notably elude to line dancing, lassos and riding (a euphemism? Probably.) Collectively, the artists return to a revisit certain formations, such as a single horizontal line direct to the audience. Here, they repeat aggressive motifs at us, rather than to us, fitting with Blakey’s own analysis of the work: “What’s always really vital about the way I want to make work, is that it never feels like you’re not included in the conversation.” I found these moments particularly exhilarating and compelling; the swift pace of movements blended with the intense volume of bass is an electric combination.Â

Not just backsides are exposed, but almost all parts of the body are moving, including the use of hair. Like the tail of a horse, it swishes and whips the air. Hair being let down is commonly a symbol of freedom. I like to think Blakey decided to use this as an additional accessory to the costumes to suggest liberation.‘Cowpuncher My Ass’ crosses the boundaries between high art, performance art, popular culture and technical dance performance. This genre-defying concept allows there to be moments that appeal to everyone. I believe this to be a result of an obviously collaborative work, showcasing artistic abilities across all platforms. With 5* costumes that tap into Westwood’s celebrated legacy — bringing punk fashion into the mainstream, and lighting by Edward Saunders, which keeps the auditorium house lights up for the first half of the performance, the show is visually unique. Award-winning composer, Mica Levi, diverts from her usual cinematic soundtracks and instead provides a pulsating, atomic aural experience, that is very much alive. The sound is cut rather abruptly at times, but this only adds to the heart-pounding, choppy and abrasive nature of the work. Produced by Ben Totty and Box Artist Management, the cohort exert their creativity to the finest standards.Â

Telling a story of pleasure and obsession, ‘Cowpuncher My Ass’ grapples with ownership, lust, manipulation and power. I can equate it to the work ‘Rouge’ by Marion Motin, in the sense of the growth of energy and roguishness within the production. It is gritty rather than pretty, fun and aÂ great emancipation of rave culture and the freedom of dance.