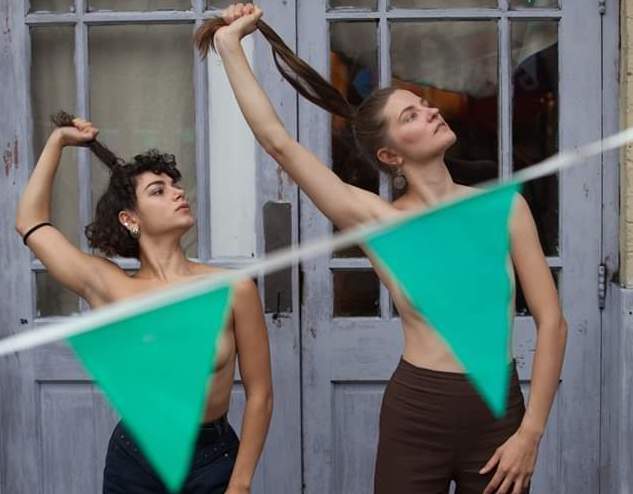 “On the 21st of June 2019, the Steamship project space organised a group exhibition titled ‘100’ where the concept was to have 100 artists exhibiting work in the same space. We were intrigued by the idea and submitted our first official work as ‘Eva O.& Sofia’ the duo. Obviously, for practical reasons, there were spatial limitations for every entry: 3D works were only allowed one cube meter of space, therefore, we made a duet that would fit in that confined space.

The piece is titled Untitled. It is a three-and-a-half durational dance where we are performing a list of ‘The Top 100 Artworks of All Time’ (which we found both hilarious and relevant) with just our two bodies and minimal props.

Untitled was voted the audience favourite, and as a reward the Steamship offered us a solo show which led to the creation of our new work Mutual Agreement.”

Exactly five months after Eva and Sofia won the performance opportunity, I find myself amongst the audience at the Steamship. The venue is a pub-turned-art-residency in the industrial heartlands of East London’s DLR territory. Stepping inside the space, we are immediately immersed in qualities of a contemporary creative space: pockets of dramatic lighting; an abundance of wall art; candles and botany on surface and floor; and not a chair in sight. There is no ‘stage’ per se; the idea is that we move as we please around the pub-sized room, different parts take part in different places.

One way to regard Mutual Agreement is as a patchwork of narrative vignettes, linked to one another by the pair’s shared approach to choreography. Stylistically, it is very Bauschian: the depth of exploration in a scene; the deadpan engagement with curious behaviour; and the drawing out of an emotional essence, from both the natural (soil, plants) and the manmade (furniture, clothing). A recurrent prop is a pair of curtains hanging from a long pole.

At the start of the piece the dancers demonstrate, all the while balancing the pole between them from the height of the bar/a stool with the finesse of circus performers, just how many ways this object can be utilised. It can balance, it can hang clothes that are being removed, in a lance-like fashion it can aid in the clothes-removal process, it can inspire idiosyncratic methods of unfastening one’s shirt, it can hold the entire audience’s rapt attention while they silently implore it to please don’t fall… This scene sets us up for a show where the mundanity of the everyday is solved by lateral thinking in the form of what I’d call lateral moving, by which I mean the unmethodical assignation of verb (action) to noun (thing), regardless of convention. The curtain opens, and we see the realm of imagination outside…

There are two stunning solos where the women wear elegant gowns, Sofia’s dress making her powerful in cascades of twirls and muscular arches, Eva’s making her powerful in stateliness and measured strides. When they come together, the connection between Eva and Sofia is deeply evident in beautifully crafted duet phrases. My favourite of these is the frivolous popcorn section towards the end. Popcorn has never induced the feeling of Is this really happening? in me before… I couldn’t believe that they had really cooked it up onstage! Using the limited resources of a lighter, a pan of water on a gas stove, and some instant popcorn, the dancers created something that pleasured our senses (it smelled delicious), and fizzed with pleasure in our direction. For me, it encapsulated the spirit of the piece.

Eva and Sofia kindly agreed to answer some questions about their creation. As they have answered so generously and lucidly, I will leave you with their words, it helps to bring Mutual Agreement to life far beyond my writing.

Q: The premise for ‘Mutual Agreement’ sounds unlike anything I’ve ever seen before. And it seems to stress that it will be unlike anything we’ll ever see again — a one-off performance, an experience contingent on the night… Why did you want this spontaneity to be central to the performance?

Eva: For me that’s the essence of performance and dance in general: the kind of fleetingness of it! An experience that happens in a certain space and time.

Sofia: Because of the genre and our actual performance, we didn’t start with the description. We made the performance first. I think the whole piece is characterised by a certain kind of spontaneity and that’s essentially because of the way we created it.

Q: Tell me a little about the creative process for the piece. How long ago did you begin working on it? Has it changed at ay point?

Sofia: We knew we were doing a solo show since June, when we found out that we were winners of the “100”. For me that’s when it began, because that’s when we started becoming friends with the idea, even though we didn’t actively work on it.

Eva: It’s easier to make work when you have a criteria to fill or some sort of a guideline – we didn’t have any. We had complete freedom; so there were many decisions to make: how to fill that space, how much of it to fill, how much time to take, everything like that.

So… how did the ball first get rolling? We were trying to think of themes, concepts, ideas.

Sofia: …that didn’t get the ball rolling.

Eva: Yeah, so we then just focused on little individual ideas that for a while had been at the back of our minds or that had just sparked from there.

Sofia: I would say that what really got the ball rolling was opening up the space within the two of us to just throw in ideas and thoughts and curiosities. Then we became super positive about everything. We were like: “ok, I have this idea, let’s try it out – it might never make it into the show, it might not be it, but I’m really curious and I want to try it out.” We didn’t really say no.

Eva: I think we just stopped trying too hard… to make something good or something meaningful or something grandiose. We just did whatever we felt like to get the ball rolling.

Eva: And the last part of the question is: has it changed much since you started? Yes and no actually. Cause we’ve always felt like there are certain things that do belong in this world and certain things that don’t belong in this world of ours that we’re creating. So that sort of feeling of what belongs has stayed the same. But the ideas themselves obviously, they have grown, developed, been polished, structured and framed out of just experiments and games into something that has a form.

Sofia: Our friend Tom put it perfectly, saying: ‘I feel like I spent two hours in the heads of you two.’ It’s the common space that our minds share where this performance lives.

Q: Back onto the topic of spontaneity — what has been the most unexpected or amusing outcome from the improvisation parts?

Sofia: When you know you’re improvising, you’re expecting the unexpected.

Eva: My thoughts went to the process of making actually. Most of our ideas come from improvisation. For example, to create the ‘Do your thing’ routine, we played word interpretation games and also were just posing in front of the mirror. But eventually that sequence turned out to be the base choreography for so many parts in the piece, as we then started breaking it down and shaping and moulding.

Sofia: For me an unexpected and amusing outcome was discovering how to talk to the audience through the microphone. That’s something I’ve never done before.  That’s also something that we didn’t even rehearse, so it was super scary. What do you do with a room of people, who are already on your side, and how do you play with the boundaries and limits of the situation? The way that everybody reacted and the way I reacted to whatever happened then and there, was definitely fun and unexpected.

Q: Thanks for taking the time to answer these questions. Lastly — I’d like to ask your angle on something. Part of our mission at ‘dance art journal’ is to untangle dance, as an art form, from the stereotype of being inaccessible, unrelatable, niche… What would you say about dance to people who might be wary of it?

Eva: We don’t always expect everybody to see what we are seeing. Then there is a fear that people might not understand the piece. We try to eliminate that fear.

Sofia: There is no wrong or right answer. I was listening to a speech by Alva Noe entitled Strange Tools: Art and Human Nature. He was talking about art and the privilege to be bored. It’s a privilege since adults are not bored, they are not allowed to be bored, to have this empty time. They always… you know… DO things. But art requires us to be bored in order to access it…

So we kind of come into the space (here I’m thinking of the dance as a space,) with certain expectations about how things are or how things should be, and according to those expectations or those ideas what you see is boring. Maybe because you just see a person… a person moving around. It’s nice and it’s beautiful but … essentially… monotonous.

Sofia: Space and time enable us to look further and deeper than the first glance, and essentially dive into the boredom and discover something new…

Art, by being boring or not being productive, allows this transformation of your perception to happen. I think what I’m trying to say is that dance’s greatest gift is being inaccessible, unrelatable, niche and ultimately boring.

Eva: I think that what can be ‘niche’ about contemporary dance is when it deals with these physical, choreographic investigations, that are sometimes based on internal scores. These may not be accessible to those who don’t have that level of bodily training. So how would you open that up to public? Is there a way?

Sofia: But that’s the beauty of dance, you don’t need to understand what’s happening. There’s no need for narrative. The important thing is just to try it. Not to be afraid of it.

Eva: If you open yourself up to movement, it’s a lot more universal than spoken words, because there is something in it for everyone.

Sofia: Dance is humble, because dance has to do with the body. You can look at it and see humans doing it. And you can imagine them in the dance studio sweating their asses off and trying to get that right. So, it’s always humble.