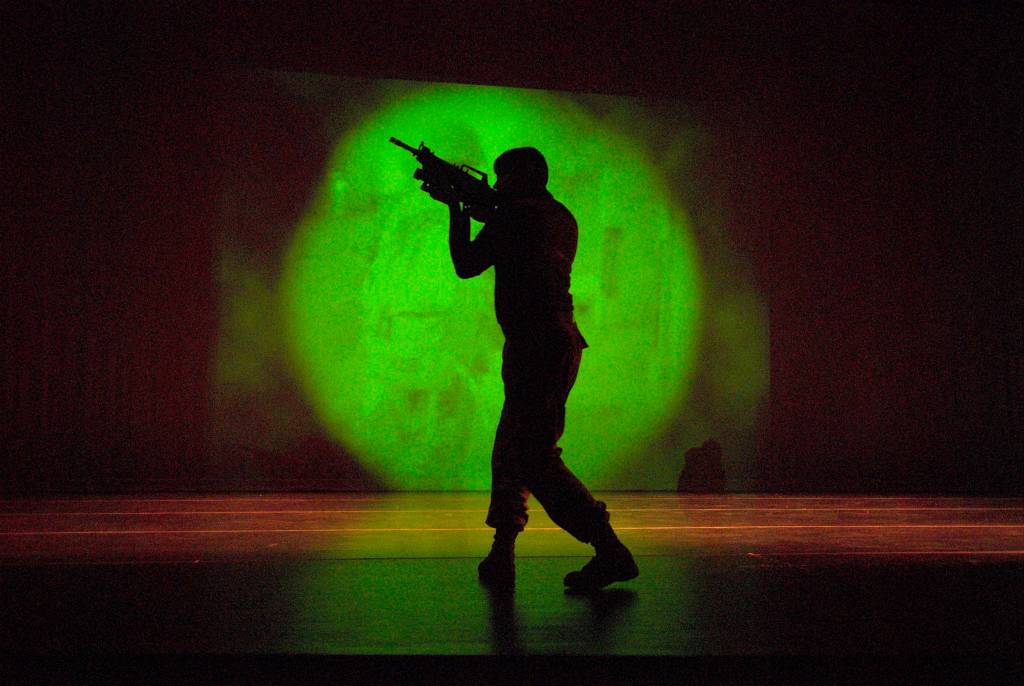 The sacrificial artist is not an uncommon image in our culture. Whether you are a dancer, writer or filmmaker, you are accustomed to sacrificing many things for the sake of your art.

For some reason we no longer identify soldiers in the same way. Reports of war-torn countries and bloodshed depict the military in a negative light – and understandably so. Yet we in our ignorance sometimes forget that separate to all the bureaucracy, and beneath all the corruption and hypocrisy, are human beings making unimaginable sacrifices to save the lives of civilians.

For Roman Baca – dancer, artistic director of Exit12 Dance Company and US Marine Iraq War Veteran – his dark military past has forged his bright future as an artist developing his practice at Trinity Laban. Roman is the 2017-19 Fulbright Trinity Laban Scholar, an award exclusive to Laban which offers US citizens the chance to pursue postgraduate study at the conservatoire.

He sits down with the dance art journal to discuss stereotypes, his new work In-Trench and how dance can be a vital mechanism for re-integrating veterans into the society they once knew.

Q: Do you think there are stereotypes against people who serve in the military?

A: I do think the people who served in the military are perceived as mindless robots whose only job is to kill. Before I served in Iraq I believed some of the stereotypes, but serving so close to so many Marines definitely changed my mind.

Some were better and some were worse than the stereotypes.  There were Marines who I idolised for their values, self-sacrifice, and commitment. Yet there were others who I despised because of their reckless ways of operating.  Thankfully, the former greatly outnumbered the latter!

Q: How has dance helped you to work through your anxieties?

A: Dance uses the body to ‘realise’ what happens in the mind – it is a physical demonstration of an abstract idea. Amazingly, we can use it to investigate and change how the body and the mind can overcome challenging experiences.

I would say at first my choreographic investigations were aimed at righting the wrongs in my mind, without a doubt.  Dance has helped me work through my anxieties by giving me purpose; something else to concentrate on rather than the anxieties that want to dominate my psyche.

Q: You make a great point in your film about the ‘movement memory’ people acquire when training for the military in boot camps.  How can veterans translate that movement into something positive?

A: In the military we refer to it as re-purposing movement, where a specific task is set to specific movement. We then have to reinforce that gesture always.  For instance, when a solider is training with a bayonet at the end of a rifle, every strike of the bayonet is accented by yelling “kill”. It may sound shocking but this is what they are being trained to do.

Now imagine how hard it is to separate that movement from its intended purpose.  The powerful thing about dance is that it can engage the body and the mind in exercises that work to re-purpose those movements.  In Exit12’s workshops, we encourage veterans to embody these imaginings to help them through the difficult process of remembering.

Q: Could you tell us about your work In-Trench?

A: In-Trench is my first durational performance installation.  Most of my previous work has been narrative-driven, where the audience connected with the story they were seeing.

In In-Trench, I use a repetitive physical activity prevalent within the military experience to delve into the deepest parts of my mind to investigate memories.  I combine digging and refilling a one-man sized fighting hole (or foxhole); with reading from a book chronicling poetry and experiences from a soldier who served in the trenches in World War I.

At certain times audience members can ask questions, where I challenge myself to answer honestly and in an unbridled manner. Previous performances of In-Trench have taken my mind to places that I didn’t think I could ever reach.

Q: What are you learning about yourself and your practice during your time at Trinity Laban? What are your future plans?

A: Right now I am concentrating on what’s in front of me – I always have faith that the future will be revealed in time!  A few months before arriving in London, I made a decision to embrace the title of artist, instead of the varied titles I used:  Marine, dancer, choreographer.  Tony Thatcher, my tutor at Trinity Laban, has challenged me to take risks.

In my new artistic creations, I’m leaving room for both the performer and audience to contribute to the work, either through their own physicality or through their experience of what is happening.  I also am enjoying not focusing on a specific outcome, and rather putting things in motion, and letting the resolution reveal itself.

Aside from directing Exit12 Dance Company, I would like to lecture in dance and the performing arts. If any of your readers know of any positions that would be for me, I would love to hear from them!